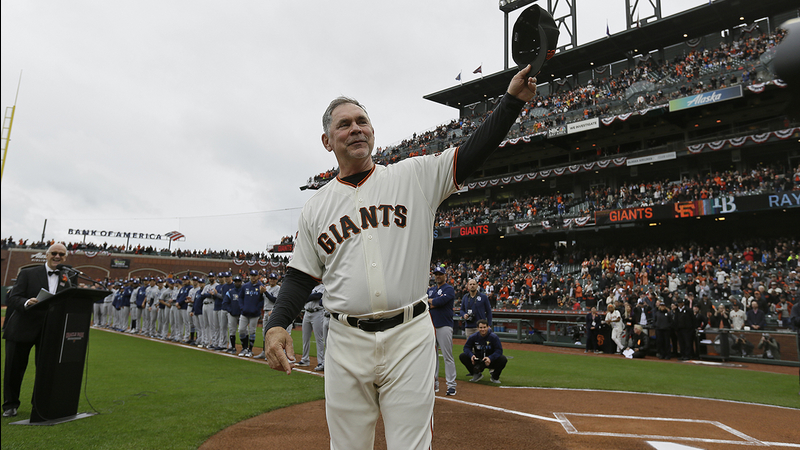 SAN FRANCISCO (KGO) -- San Francisco Giants manager Bruce Bochy is retiring from the team after this season, but will be sent off in style with a series of ceremonies starting Friday evening.

Bochy's tenure with the Giants included three World Series championships in 2010, 2012 and 2014, and ends with three games at Oracle Park against the Los Angeles Dodgers on Friday through Sunday.

Prior to Bochy's final game on Sunday, the team plans to hold a noontime foghorn salute, inviting as many foghorns as possible from ferries, yacht clubs, cruise ships, kayaks and other vessels that will gather around Oracle Park and McCovey Cove to give the manager a noisy farewell.

People wanting to participate from elsewhere can visit www.sfgiants.com/bochy to find a digital foghorn sound button, according to the team.

After the game, there will be a farewell ceremony including a number of guests commemorating Bochy's 13 years with the Giants.

Earlier in the weekend, at a pre-game ceremony before Friday's game Bochy will hand out the team's Willie Mac Award to a Giants player "who best exemplifies the inspiration, character and leadership" that Willie McCovey demonstrated during his Hall of Fame career with the Giants, the team said.

On Saturday, Mayor London Breed will be joined by some former San Francisco mayors to present Bochy with a key to the city during a pre-game ceremony.

The Giants are offering $15 discounts on tickets for games on the team's website.

Last week, Bochy became the 11 manager in MLB history to win 2,000 games in his career.