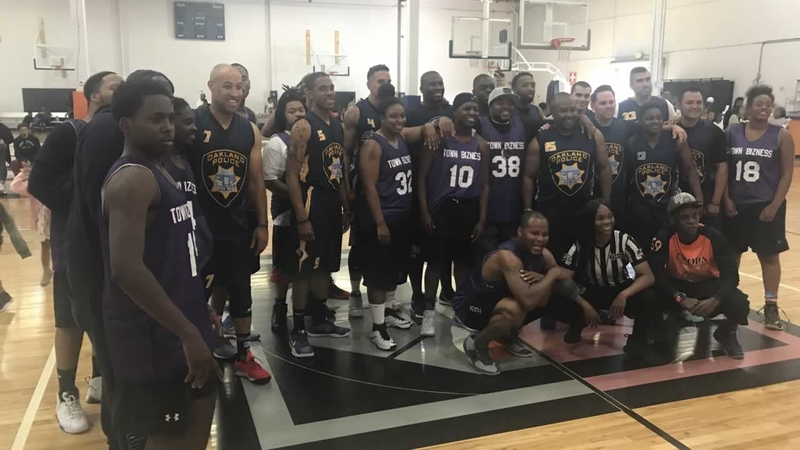 OAKLAND, Calif. (KGO) -- Oakland PD ditched their gunbelts and badges, in favor something a little more breathable, for a game of hoops against team Town Bizness, in a first ever Building Bridges Basketball Game.

"I started this process to bridge the gap between the community and police," said Zimbabwe Davies who spent the past year organizing the game.

He put together a team of kids, young men and women, to represent Oakland against the police department. "This is like a reintroduction for the community with the police, to have a basketball game and then have the difficult conversations."

The basketball game comes at the end of an especially tough week in Oakland. There was the BART stabbing that left 18-year-old Nia Wilson dead and the vigils and demonstrations that followed. There was also concern that a white supremacist group was coming to town. So the basketball game, was a welcome event for city and community leaders.

"This has been a heartbreaking week," said Oakland Mayor Libby Schaaf who showed up to Jamtown to cheer on the teams. "This feels very healing for me as the mayor and I'm sure for everyone out on that court."

Oakland PD's Assistant Chief Leronne Armstrong put on his OPD baskteball jersey and made sure the competition on the court stayed friendly. "We've seen a week of senseless violence in our city and just to have an opportunity for everybody to come to a peaceful event, where we can engage, get to know each other and just fellowship playing basketball."

When the buzzer sounded, OPD walked off the court with the highest score. But as Assistant Chief Armstrong said, "it wasn't about the win, it was about the fun."

The real winner was Oakland.