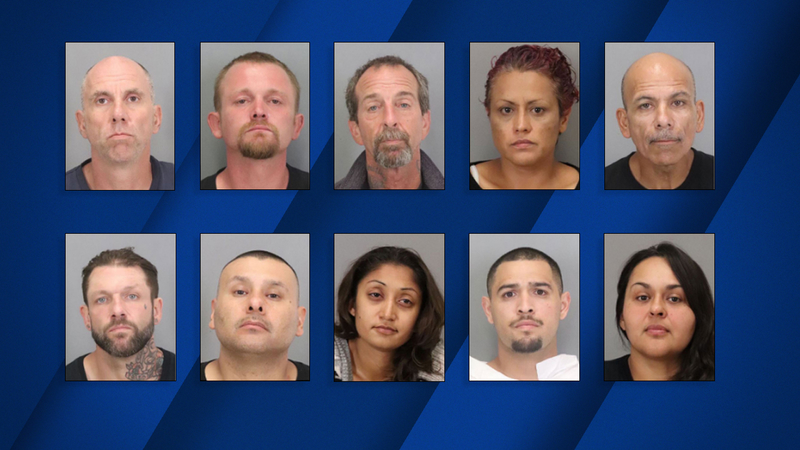 SAN JOSE, Calif. (KGO) -- The San Jose Police Department took down a crew of 10 people they believe are tied to dozens of commercial burglaries across the Bay Area.

The six suspects were then arrested and booked into Santa Clara County jail for a number of felony charges including commercial burglary, and conspiracy.

The department believes the burglary crew committed dozens of crimes in 13 Bay Area cities, since January 2019.

Police Chief Eddie Garcia said while his department has seen a drop in residential burglaries, they've noticed a spike in commercial theft.

"100 different burglaries aren't committed by 100 different people. They're committed by crews such as this," Chief Garcia explained. "And taking down one crew like this really will clear a lot of burglary cases up and prevent many more from occurring."

Mardell shared footage of a 2018 hit at his shop along The Alameda in San Jose. Video shows a crook carrying out the first of two $4,000 bikes.

Loss, plus the cost of repairs that meant more money out of Mardell's pocket.

However, Mardell is hopeful, "Sometimes the police take an hour to show up and we're frustrated by that. But when we hear good news like this, we're like, thank you, I can't believe this is happening."

Thursday's arrests offer relief to businesses across the region.

"Oftentimes, we don't think of burglary as this type of violent crime. It's a very personal crime to our residents and it's something that they want us to address," Chief Garcia added. "Now, especially with the guns that we recovered, we could see that this type of crime isn't necessarily as non-violent as people make it out to be."

Garcia said his department seized an AR-15-type ghost gun in the investigation.

Anyone with information is asked to contact Lieutenant Greg Lombardo of the San Jose Police Department's Burglary Prevention Unit at 408-537-1200. Tips can be provided using the BPU Tipline at https://www.sjpd.org/bputipline