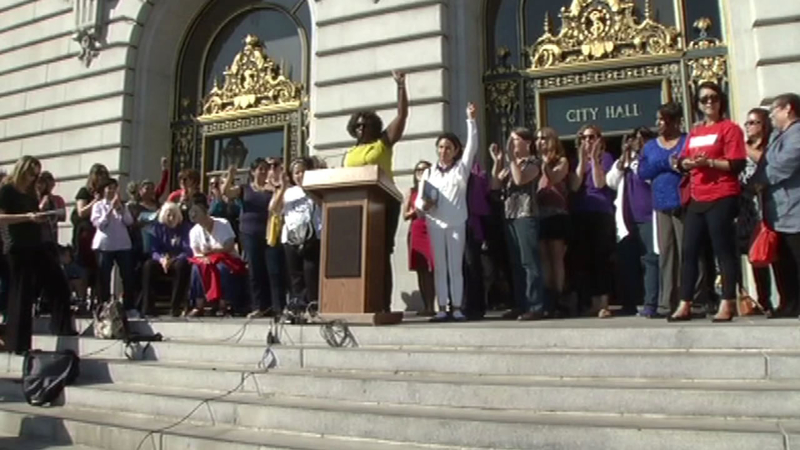 SAN FRANCISCO (KGO) -- Women's rights organizations are rallying around a new measure in San Francisco designed to help bridge the gender gap when it comes to paychecks.

Ruth Silver Taube worked as a machinist in San Jose back in the 1990's. She says she made $3 an hour less than her male counterparts doing the exact same job. "I was outraged. It was very unfair. I was upset about it," said Taube. She says things really haven't changed that much.

"Our legislation is landmark. First of its kind that says anyone who contracts with the city must provide information about pay. Not only gender, but by ethnicity and race," explained Campos.

He believes that knowledge has the power to close the pay gap. The city's Human Rights Commission would investigate complaints. "There will be consequences. It will have teeth and make a difference and set a model for the whole country," said Taube.

Taube filed a grievance against her old company and now works as a lawyer with the Legal Aid Society and the Bay Area Equal Pay Collective.

With women making up more than 50 percent of the workforce, wage discrimination can have a significant and severe impact in a high-cost city like San Francisco. If this legislation passes, hundreds of contractors will have to divulge their data each year.

"We're also calling upon all city agencies to collect similar information. If we're requiring contractors collect this information, it's only appropriate that we do the same," said Campos.

This is just a proposal. A working group composed of appointees by the mayor, the board and the Commission on the Status of Women would need to work out the details. And there will be hearings on this measure to give contractors a chance to air their concerns.