Billboard spending on the rise as economy grows 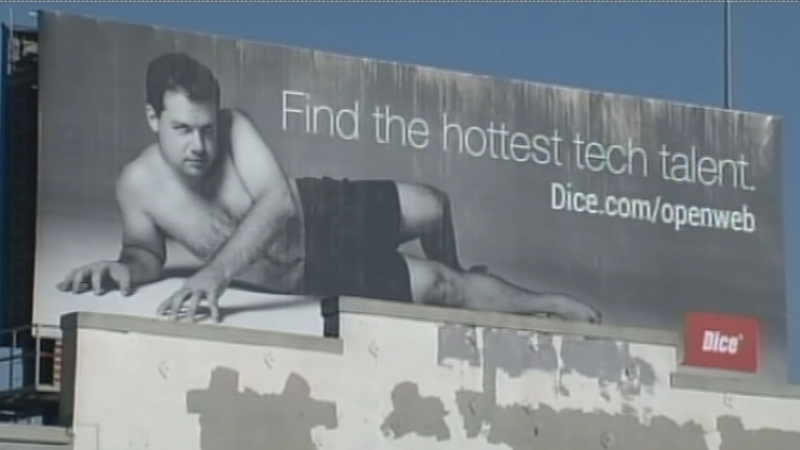 San Jose, Calif. (KGO) -- In recent years, stretches of the 101 have seen a different type of traffic.

Those racing down the freeway in the Silicon Valley may be catching glimpses of some racy billboards lining the freeway. When the economy booms, those billboards become some of the most expensive real estate in the Bay Area.

"The tech community is really using that as an information highway for what they're trying to promote," said Matt Moline with OUTFRONT Media.

In a digital world, more tech companies are going old school by turning to billboards above the ground, such as the popular naked nerd ads.

Shravan Goli is the president of Dice, the business behind the campaign that's turning heads. They create tools to help companies connect with technology talent. "We're getting a lot more inquiries into dice open web, to get requests for demos, as well as them just finding out more about the product itself, so it's been exciting so far," said Goli.

The ads seem to be connecting with commuters, too.

According to OUTFRONT Media, billboard spending in the Bay Area has doubled since 2011. One of these boards can cost up to $55,000 per month.

Eric Yuan is the president of Zoom, a next-gen video conferencing tool used around the world. He says billboards can be a point of pride among Silicon Valley techies.

But more importantly, it is a direct link to the consumer.

"As the marketplace continues to get more fragmented with social media and different areas, billboards are still where the people are. There are still a bunch of eyeballs on them, and they're still going to have value moving forward," said Molina.