AP
LOS ANGELES -- A fire sale took place at marijuana dispensaries on Saturday. Strict regulations go into effect July 1 across the state, which means shops had to sell all non-compliant products by the end of business day Saturday.

California is requiring shops to sell only marijuana that has been tested for pesticides, potency and microbiological contaminants.


Many businesses aren't happy about the new requirements. Nearly 150 marijuana businesses warned they could face crippling financial losses unless the state extends the July 1 deadline.

In a letter to Gov. Jerry Brown, the United Cannabis Business Association said the changes would further unsettle the struggling legal marketplace that launched Jan. 1, potentially forcing businesses to close their doors.

The trade group that represents cannabis companies said there are too few labs to handle the testing, and retailers would have to destroy vast amounts of unsold cannabis that does not meet the new standards.

Association president Jerred Kiloh estimated that businesses could face nearly $400 million in losses if those unsold supplies are destroyed.

"Forcing the industry into compliance ... will further cripple the already struggling regulated market," the letter said.

In a statement, the state Bureau of Cannabis Control gave no indication it would consider rolling back the deadline.

"We issued our emergency regulations back in November, and at that time we were pretty clear about the fact that there would be a six-month transition period for retailers to use up their existing supply. We felt that was a sufficient amount of time to deplete stock on hand and adapt to California's new rules," agency spokesman Alex Traverso said in an email.

The regulations are being phased in six months after the state broadly legalized marijuana and required that pot sold after Saturday meets strict quality standards. Retailers have been unloading untested inventory at bargain-basement prices.

The rollout of the nation's largest legal pot market has been bumpy at best. The black market is still flourishing, and the industry complains about taxes that can approach 50 percent in some areas.

Others fear a shortage of retailers for both adult-use and medicinal marijuana could shut down the supply chain, stranding growers with mountains of unsold pot.

California is operating under temporary regulations, while the largest city, Los Angeles, has been slow to issue licenses.

The change in rules was part of the state's decision to allow the industry to get a running start at the beginning of the year. Shops were given six months to burn through supplies of cannabis and edibles produced without strict testing requirements.

Any marijuana harvested this year, or for sale July 1, must meet quality and safety standards or be destroyed.

The letter depicted an emerging industry that is struggling to find its footing.

The group said the 30 licensed labs that would test pot would be unable to handle demand, resulting in a shortage of products on shelves. A system intended to track plants from seed to sale has been delayed. And packaging companies are not ready to meet the new rules.

"Customers and patients will turn to illicit market retailers and delivery services who will still have an abundance of products for sale. Licensed retailers will be forced to shut down," the letter said.

The businesses and advocacy groups that signed the letter represent a fraction of the state's legal marketplace. For example, over 3,300 cultivation licenses have been issued, and there are more than 400 licensed retailers.
Report a correction or typo
Related topics:
businesslos angelesmarijuanacannabis watch
Copyright © 2020 by The Associated Press. All Rights Reserved.
RELATED
'Fire sales' at Bay Area cannabis dispensaries ahead of July 1 rule change
Humboldt marijuana growers tighten belts for legalization
Labs warn of dangerous, contaminated pot at dispensaries 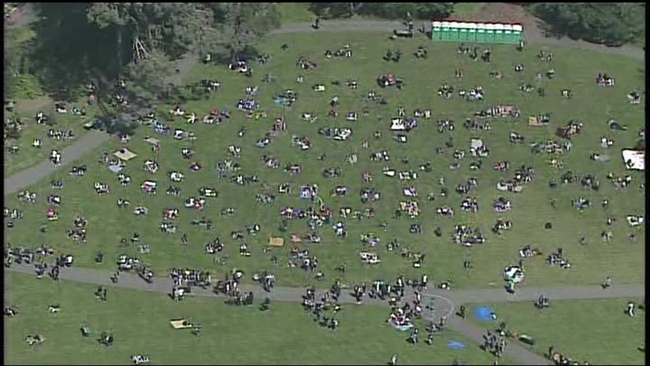