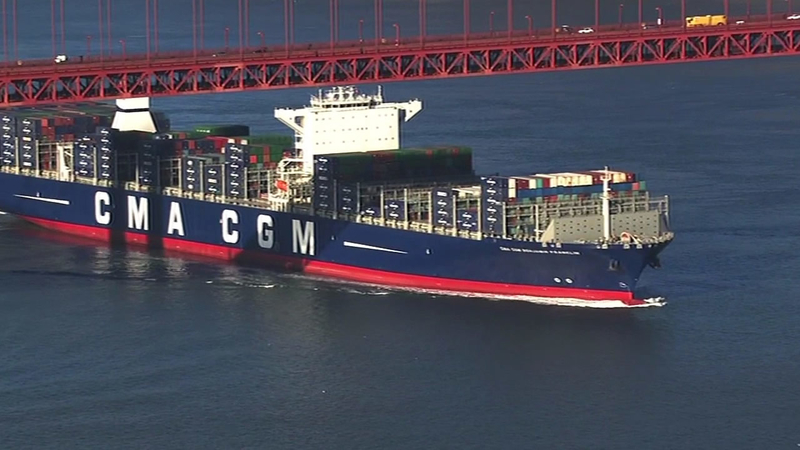 OAKLAND, Calif. (KGO) -- After lowering some of the electronic antennas, the Benjamin Franklin passed under the Golden Gate Bridge Thursday morning, with about 20 feet to spare.

The ship is a quarter-mile long, making it the biggest ship to ever dock at an American port. The megaship can hold up to 18,000 20-foot shipping containers. The largest ships serving the U.S. can carry 14,000 containers.

A quarter mile long, the Benjamin Franklin has to move slowly. Barely clears the tops of the Port's tallest cranes. pic.twitter.com/bLAR3aRkL6

Ships like this are actually common on routes between Asia and Europe. Overall, they cost less to operate, use less fuel and they pollute less.

But for the port that's receiving the ship, handling something this big requires some effort. "It's like a highly orchestrated ballet. You need to take containers off the vessel, imports, will you are loading exports on the vessel. You need to get the containers staged, so the trucks can get them in and out of the port," explained Mike Zampa, Communications Director for the port.

Economist Jock O' Connell drove out from Sacramento to watch history unfold at the Port of Oakland. "We're waiting for the largest container vessel ever to call at a U.S. port," he said.

A small crowd gathered on shore at the port as the Franklin was making its way under the Golden Gate Bridge. "Something that big coming into the bay is pretty impressive," one man said.

The Port of Oakland has been preparing for this for years. Oakland is one of only a handful of U.S. ports that can receive megaships, which carry large loads of cargo.

The port has invested millions of dollars in changes, including dredging berths and channels to depths of 50 feet, raising the heights of cranes and modernizing marine terminals, port officials said.

Last month, port officials announced they will be raising the height of four gantry cranes at the Oakland International Container Terminal by 26 feet to accommodate megaships. The $13.95 million project is scheduled to begin in April.

O' Connell said the effort's well worth it for the port. "The port's last winter came through a very bad period of labor turmoil, a number of logistical snafus," he said.

This was their chance to prove to the shipping lines that they can handle the new generation of bigger ships. "73,000 jobs depend on the port. If we bring in more cargo, we can create more jobs and that is one of the primary missions of the Port of Oakland," Zampa said.

The bar pilots have been practicing navigating a ship this big on simulators out in the bay.

The port's had to get taller cranes and dredge out deeper channels and berths, all for the likelihood that more ships this big will follow in the years to come.

The Franklin's visit to Oakland is considered a trial run. Officials want to ensure that the vessel can be berthed and cargo discharged efficiently.

The megaship is expected to set sail for China on Sunday.

At the Port of Oakland, the sun is setting over the Benjamin Franklin, the largest container ship to visit the U.S. pic.twitter.com/nH8k8v7b5h

The Benjamin Franklin is pulling into the Port of Oakland -- largest container ship to call on an American port. pic.twitter.com/wz2c7pQn1r