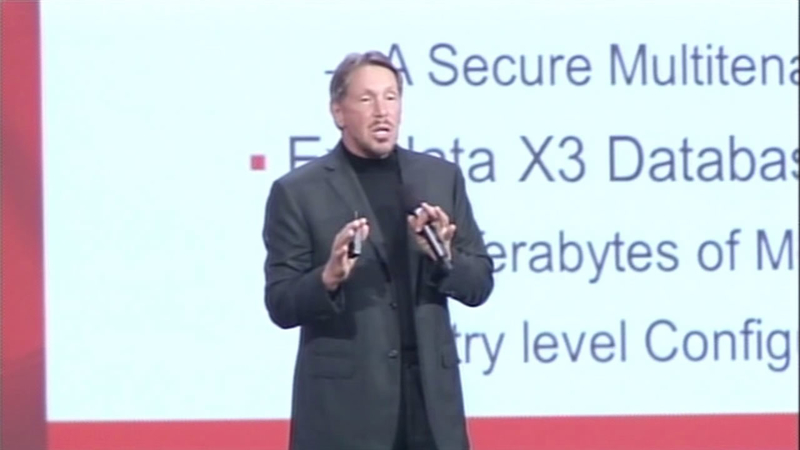 Larry Ellison steps down as CEO of Oracle

REDWOOD CITY, Calif. (KGO) -- On Thursday, the man who had the vision and drive to create Oracle decided he has had enough at the top of the corporation.

The reasoning behind Larry Ellison's decision to step down isn't entirely clear. At age 70, he has been at the helm at Oracle for 37 years; the longest run of a tech company CEO.

But he's not going away. He will become Chairman and Chief Technology Officer. Operations, finance, marketing and sales will be turned over to two lieutenants, Safra Catz and Mark Hurd. It allows Ellison to focus on engineering at a time when the company is facing mounting competition from cloud-based database services.

The big announcement came on a day when Oracle's earning missed expectations and Oracle has growth challenges.

Terry Connelly is a former investment banker and Dean Emeritus at the Golden Gate University Ageno School of Business.

Ellison does appear to be following in the footsteps of Microsoft's Bill Gates, who also moved up to Chairman after being CEO. Ellison made a salary of $77 million last year, but there's no indication how changing titles will impact his pay.

Oracle has already made Ellison rich. Forbes ranks him the fifth wealthiest person in the world, worth an estimated $51 billion. He has mansions. He owns most of the island of Lanai in Hawaii. He also can afford to engage in yacht racing, a passion that led to the America's Cup being held in San Francisco Bay last year. Ellison's team has won two times.

Some analysts argue there might be confusion over who's the captain with both Catz and Hurd at the helm of Oracle.