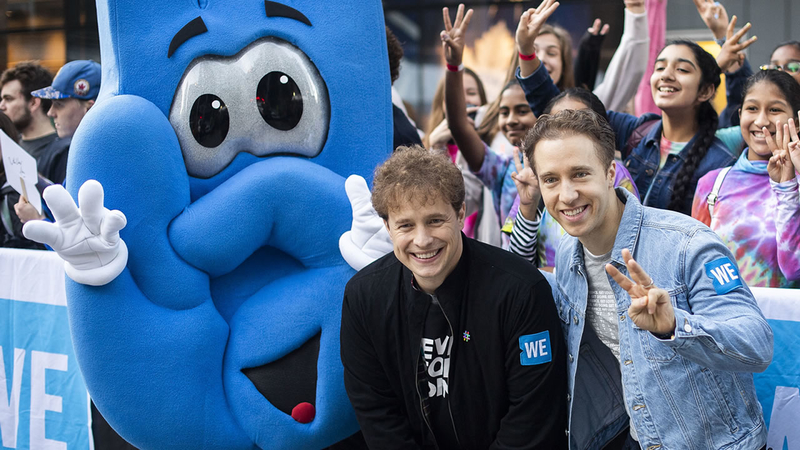 SAN FRANCISCO (KGO) -- A well-known international nonprofit that's promoted service work to more than 400,000 California students and has been highly endorsed by Gov. Gavin Newsom is being investigated in Canada.

A Parliamentary committee investigating WE Charity held a hearing Thursday about the nonprofit's business dealings. The charity became scrutinized after receiving a $900 million COVID contract in June to oversee a student service grant in Canada intended to help students with volunteering.

"We all stopped and said wait... what?" said Charlie Angus, a Canadian member of Parliament, who sits on a committee investigating WE Charity for the past eight months.

What is WE Charity?

WE Charity, formerly known as Free the Children, was founded in Canada in 1995 by two brothers, Craig and Marc Kielburger. It started as a club to ban child labor but transformed into one of the world's largest international nonprofits aimed to empower youth around the world.

"We want you to be empowered with whatever causes or issues you care about," the brothers said at a 2015 fundraiser in California.

More than 100 big corporations around the world have donated millions of dollars to the organization including, Google, Microsoft, Allstate, and Disney -- the parent company of ABC7.

WE Charity in California

WE Charity officially launched in California in 2014. Gavin Newsom, who was lieutenant governor at the time, tweeted on March 26 of that year to welcome the charity's first statewide fundraiser "WE Day California" hosted inside the Oakland arena.

16,000 students from hundreds of schools across the state packed inside to watch celebrities like Selena Gomez, Orlando Bloom, and Seth Rogan perform sharing inspirational messages.

"You are changing the world," said Gomez to a crowd. "That's amazing."

In order to attend, students needed to do local and global acts of service. A common one was raising money to build schools for underprivileged kids in Kenya and Ecuador.

"These people want to make a change in this world," a young attendee told ABC7. "It's amazing."

The charity kept that amazing reputation up until June of last year.

How the scandal started

The ABC7 I-Team spoke with Charlie Angus and Pierre Poilievre, both federal members of Parliament. They each represent two of Canada's four political parties.

"It all started with the COVID contract," Poilievre said. "It raised some eyebrows."

Poilievre is referring to the $900 million COVID contract WE Charity received to oversee a student service grant in Canada to help students with volunteering.

"The revelations just keep getting worse and worse," said Poilievre.

"What's really shocking about WE Charity is they seem to have an incredible capacity to deeply embed themselves with key political figures," Poilievre said.

Newsom, who was Lt. Gov. at the time, became co-chair of WE Day California with his wife, Jennifer, from 2014 to 2016. Newsom even sent a letter to former California State Superintendent Tom Torlakson encouraging all school districts and administrators to attend the inaugural year.

"No one is given a ticket here, you have to earn the right to get here," said Newsom at the charity's fundraiser in 2015.

The Newsoms spoke at WE Day California in 2015 along with San Jose Mayor Sam Liccardo.

Liccardo's office told ABC7 they have no record of any payment received from WE Charity for that speech given in 2015.

According to state public finance records, a couple of weeks before Newsom spoke at WE Day 2015, records indicate Newsom made a behested payment - which according to the Fair Political Practices Commission means he requested Comcast to make a donation to the nonprofit for $242,500.

Records show the following year another organization founded by the Kielburger brothers sent the Newsoms baby gifts worth $110.

The ABC7 I-Team reached out to the Governor's office for further comment but has yet to hear back.

"Certainly there's been a huge shift for WE USA," Angus told ABC7. "California is a big, big market in terms of the superstar status of people that get involved in WE Days and the donors. There's a lot of donor money."

$490 million has been raised for WE Charity across the U.S. since 2011, according to the charity's tax forms filed with the Internal Revenue Service.

So - where is it all going?

"We're all told this is to do with helping the children," Angus said. "But, actually tracking and figuring this out has pretty much stumped a parliamentary committee."

WE Charity claims on its website 90% of donations from the U.S. and Canada 'support programming' while only 10% goes towards 'administrative costs.'

"I'd like to commit to 100 schools around the world. 100 schools," Oprah Winfrey said in an interview with the Kielburger brothers.

Since the brothers appeared on Oprah in 2000, WE Charity claims 1,500 schools and school rooms have been built across the world with funds. But, the nonprofit has been unable to provide a list of each location to the Parliamentary committee.

"Can't tell us where those schools are, who the students are, who the teachers are," said Poilievre. "How can we even prove they exist?"

The lack of clarity leaving donors with more questions about where their money went - something Reed Cowan knows well. Cowan is a journalist in Las Vegas who testified before the Parliamentary committee via Zoom.

"I'm here today to speak on behalf of this little guy right here, this is Wesley Cowan," Cowan said.

After his son Wesley died in a swinging accident, Cowan honored his legacy by raising money to build a WE School in Kenya in 2009. The school plaque was inscribed with Wesley's name. But, Cowan testified he learned years later, WE Charity replaced his plaques with other donors several times.

"It feels like to me returning to my son's grave to find it broken open, defiled, and empty," Cowan said during his testimony.

Parliament committee member: "Why would a plaque ever be taken down? I've tried to think it through, I just can't really figure out the answer to that one."

Craig Kielburger: "I agree with you it should have never have happened. We made a mistake."

Allegations have surfaced that multiple donors have been funding the same projects at WE Schools in Africa.

"Someone even said that these plaques to honor donors might as well have velcro on them because they were removed and replaced so rapidly," Poilievre said.

According to a demand letter sent on March 26, Cowan requested WE Charity pay $20 million in damages to be shared with a philanthropy fund, citing his reputation and livelihood was destroyed learning about the removal of his son's plaques. The letter also states for $250,000 to be set aside for donors who come forward with proof of a donation made in honor of his son.

The organization has since apologized again but responded to the letter saying Cowan has no basis for accusing WE Charity of fraud.

The ABC7 I-Team contacted WE Charity for a list of all the WE Schools built with money donated by Californians. We also asked if any California families were paid more than $100,000 in fees or expenses during the period of 2014 to 2019.

WE Charity said it was unable to provide that information as it pertains to private individuals.

However, the nonprofit did provide us the following statement:

"Over the years, WE Charity has provided youth volunteerism programs to 18,000 schools in Canada, the United States and the United Kingdom, empowering young people to help more than 5,000 causes. In California, WE Charity serves 1,400 schools and educational groups with free curricular programs supporting youth service, youth mental health, and trauma-informed learning programs."

Angus told ABC7 it appears the organization is doing good work, but have yet to provide key facts to prove it.

"We actually haven't gotten a picture of who owns what and how the money flows," said Angus. "Without that, how can you say you trust it?"

The Canadian Parliamentary Committee investigating WE Charity had authorized issuing four subpoenas to get any executive leaders of the non-profit to testify. The parliamentary committee told ABC7 all but the organization's Chief Financial Officer, Victor Li have done so. Li's attorneys have said he's ill and therefore unable to attend.

The parliamentary committee has requested Li to answer a list of questions in writing by Friday.
Report a correction or typo
Related topics:
businesssan franciscogavin newsomeducationcoronavirusschoolcanadai teamfraudnonprofitdonationsinvestigationcovid 19
Copyright © 2021 KGO-TV. All Rights Reserved.
I-TEAM