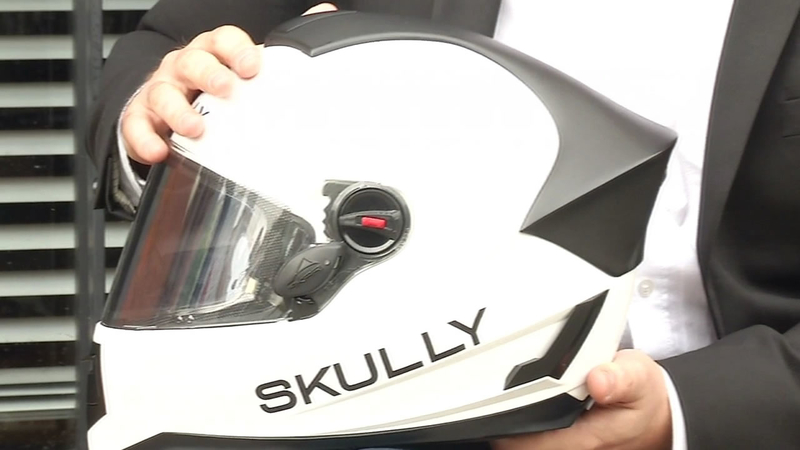 SAN FRANCISCO (KGO) -- On Thursday, a group of motorcyclists set a new world record. And it wasn't for speed or distance. They're innovators who've created a new high tech helmet, and they just raised more money on Indiegogo than any other tech campaign in the site's history.

"The idea actually came from a motorcycle accident that I had in Barcelona," said SKULLY Helmets founder and CEO Marcus Weller.

Weller had turned to look at a street sign when a car stopped short in front of him.

"A few months later I had this dream that I was back on the motorcycle that day," he said. "But there was a really important difference, which was that I had GPS maps and they were floating out in front of me like a hologram.

With his eyes on the road, he could've avoided the crash. And that's how he came up with SKULLY Helmets.

"It takes fighter pilot helmet technology and sort of makes it accessible for the average motorcyclist," he said.

The $1,500 helmet has a visor that darkens electronically and a prism that projects what looks like a floating image.

"When you're looking far away, and you glance down at the display, it looks far away," Weller sid.

In SKULLY's video simulation, you can see what takes up most of that image -- a panoramic camera mounted on the back of the helmet makes blind spots a thing of the past. And yes, it talks.

They plan to show data like speed and fuel level from bikes that support it. And it works with your smartphone.

They launched a campaign to fund it on Indiegogo.

SKULLY continues to smash through records, making it one of the most successful crowdfunding campaigns in history. And to think that just a year ago, they were in a crowded room with a dozen other startups. But even then, there was something special.

"Those guys believe so heartily in this product, and their passion for it bleeds right into it," said Kyle Ellicott.

Ellicott co-founded the Wearable World startup accelerator, where SKULLY was born and showed off its first prototype back in April. He says it's way more than a gadget.

"It's something that changes the game in terms of transportation," Ellicott said. "When it comes to motorcycle safety, there's gonna be nothing like it. It's going to actually save lives."

And for Weller, it might make riding fun again.

"It feels more comfortable," he said. "It feels like somebody's looking out for you."