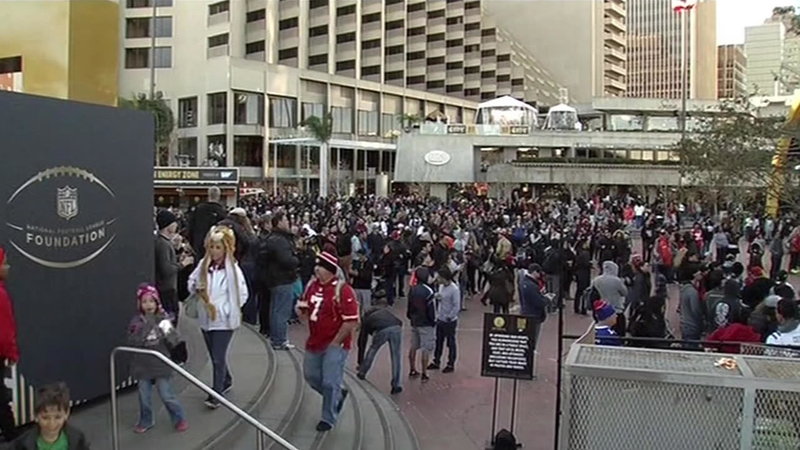 SAN FRANCISCO (KGO) -- Now that the crowds are gone, San Francisco is beginning to tally its winnings - if any. Some businesses didn't do as well as expected.

When Super Bowl City went up more than two weeks ago, street vendors were forced to leave.

"The shoe shine guy on the corner of Market and Drumm, the vendors, the street artists, those people who had valid city permits," said Supervisor Aaron Peskin, who will now introduce a motion to compensate them.

He's asking for half a million dollars.

At a Lunar New Year celebration in Chinatown, San Francisco mayor acknowledged not every downtown business did well.

"We'll take a look at what businesses did suffer, and why," said Mayor Ed Lee.

Ozumo, a Japanese restaurant, suffered loses early in the week but slightly recovered over the weekend.

"I think a lot of people in the Financial District were told to telecommute. We're typically busy and that's our cliental. Them staying away hurt our business," explained Greg Svitenko, the restaurant owner.

"I made it a point to stay away from our office last week. I think the city didn't have any consideration for the millions of us who drive into work every day," said Wayne Feinstein, an investment counselor who typically eats out for lunch.

High-end restaurants like the Slanted Door and Boulevard also experienced loses because locals stayed away. And many Super Bowl fans ate a less expensive eateries.

Restaurants do have some advice for the mayor and other city officials.

"Maybe send out a Super Bowl liaison to actually instruct us more on how we conduct our business and how it will possible affect us," suggested Svitenko.

That's if the city considers hosting another Super Bowl.