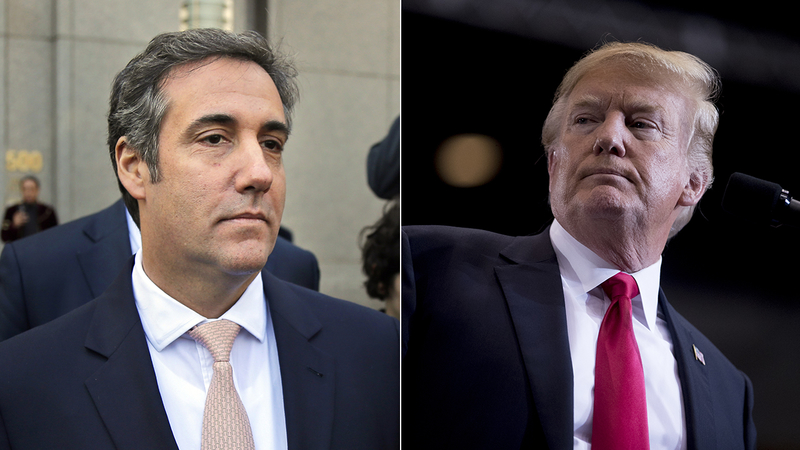 BuzzFeed, citing two unidentified law enforcement officials, reported that Trump directed Michael Cohen to lie to Congress about a Moscow real estate project and that Cohen told Mueller the president personally instructed him to lie about the timing of the deal. The report said Mueller's investigators learned about Trump's directive "through interviews with multiple witnesses from the Trump Organization and internal company emails, text messages, and a cache of other documents."

The report said Cohen acknowledged Trump's instructions when he was interviewed by the Mueller team.

"We urge the special counsel to make clear what he's disputing," Smith said.

Immediately after the special counsel's statement was issued, Trump retweeted several posts that called the story fake news. He later tweeted: "A very sad day for journalism, but a great day for our Country!"

Remember it was Buzzfeed that released the totally discredited “Dossier,” paid for by Crooked Hillary Clinton and the Democrats (as opposition research), on which the entire Russian probe is based! A very sad day for journalism, but a great day for our Country!

Fake News is truly the ENEMY OF THE PEOPLE!

Trump's lawyer, Rudy Giuliani, tweeted: "I commend Bob Mueller's office for correcting the BuzzFeed false story that Pres. Trump encouraged Cohen to lie. I ask the press to take heed that their hysterical desire to destroy this President has gone too far. They pursued this without critical analysis all day. #FAKENEWS."

The extraordinary statement from Mueller's office came after Democrats had vowed to investigate whether the report was true, calling that possibility a "concern of the greatest magnitude." House intelligence committee Chairman Adam Schiff, D-Calif., and House Judiciary Committee Chairman Jerrold Nadler, D-N.Y., both said they would probe BuzzFeed's account. Some Democrats even said that if the report were true, then Trump should be impeached.

The Associated Press had not independently confirmed the report. Any evidence that Trump directed a witness to lie to investigators would place him in the greatest political and legal jeopardy yet.

Giuliani said in a statement earlier Friday that "any suggestion - from any source - that the President counseled Michael Cohen to lie is categorically false." White House spokeswoman Sarah Huckabee Sanders called the allegation "absolutely ridiculous."

On Twitter on Friday morning, Trump charged that Cohen was "Lying to reduce his jail time!"

Cohen pleaded guilty in November to lying to Congress to cover up that he was negotiating the Trump Tower project on Trump's behalf during the heat of his presidential campaign. The charge was brought by Mueller and was the result of Cohen's cooperation with that probe.

Cohen admitted that he lied when he told lawmakers he had never agreed to travel to Russia in connection with the Moscow project and when he said that he'd decided by the end of January 2016 that the "proposal was not feasible for a variety of business reasons and should not be pursued further."

He was sentenced to three years in prison for crimes that included arranging the payment of hush money to conceal his boss' alleged sexual affairs, telling a judge that he agreed time and again to cover up Trump's "dirty deeds" out of "blind loyalty."

Giuliani noted that Cohen had pleaded guilty to lying and quoted federal prosecutors in New York who chastised him for a "pattern of lies and dishonesty over an extended period of time." Mueller's team, however, had previously called him a credible witness.

Cohen is scheduled to testify publicly before the House Oversight and Reform Committee on Feb. 7. The top Democrat on the Senate intelligence committee, Virginia Sen. Mark Warner, said Friday that he expects Cohen to talk to that panel in February.

Although House Speaker Nancy Pelosi has discouraged any talk of impeachment in the early days of her new majority, some senior Democrats said that if the BuzzFeed report was confirmed, Trump's actions could rise to that level.

"If the @BuzzFeed story is true, President Trump must resign or be impeached," tweeted Texas Rep. Joaquin Castro, a member of the House intelligence panel.

A Senate Democrat, Chris Murphy of Connecticut, tweeted that "we need to know this ASAP" if Mueller does have multiple sources confirming that Trump directed Cohen to lie.