Leaders from free speech movement rally students at UC Berkeley to get out, vote 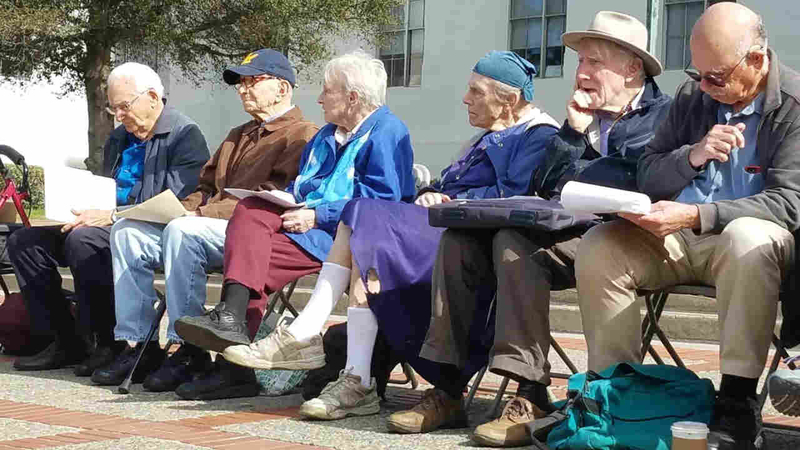 BERKELEY, Calif. (KGO) -- It's been 54 years a since the Free Speech movement ignited on the steps of Sproul Hall at U.C. Berkeley.

The student-lead protest fought to overturn an on-campus ban on political activities. Some of the original members spoke Monday afternoon at Sproul Hall with a specific message for students.

"There is never enough that you can do. And we will see if (young people) turn out to vote. That's the least you can do," says Lynne Hollander Savio, the widow of Mari Savio, who lead the free speech fight more than half a century ago. Her message to young voters: use your vote as a voice for change.

Members of the #UCBerkeley's original #FreeSpeech movement speaking at Sproul Hall, encouraging people to  come out and #vote. Full story on @abc7newsbayarea at 4PM. #whereyoulive pic.twitter.com/R0Is8zn3yE

"Don't be apathetic. You can affect change. And, you should be working for change because we need a lot of improvement," says Hollander Savio.

She was joined by several of the original students and faculty who took part in the free speech fight back in 1964. One of them was Leon Wofsy, who is now 97-years-old. He believes today's political climate is even more divisive than the 1960s.

"I'm more interested in the present, because I think we are facing a crisis of democracy that's greater than anything we've seen since the civil war," explains Wofsy.

He says every generation of young people has met the challenge of free speech. He hopes this generation of millennials will do the same. "I think the youth and the women are responding in a way that is an example for everybody," he says.

Wofsy believes college campuses need to make space for conservative critics as well, like Milo Yiannopoulos, whose speech was canceled by UC Berkeley last fall after violent protests on campus. But Wofsy also makes a strong distinction between free speech and hate speech.

"We shouldn't tolerate speech that's smacks of fascism, and racism, and that incites people to do what was done in Pittsburgh this past week," says Wofsy. "Once you see that hate speech is a speech that incites violence, then you've crossed the line, which democracy can't afford."

Student speaker Alexandra Barr, told the enthusiastic crowd, "When we vote, our civic duty has not ended, it has just begun!"

For Junior Clarissa Pickett, the speakers and their message was also a reminder for republican and conservatives students to not back down against the wave of liberalism that dominates the CAL campus. "Especially when your beliefs in this upcoming election vote have to do with things like abortion rights and flipping the senate. I think people feel like their values are at risk," says Pickett.

Sophomore Anthony Benjamin says he stumbled upon the rally and decided to check it out. He says the rally was strong reminder of the many privileges he takes for granted.

"They grew up in such a different era, when people were actively and consistently trying to stop other people from voting, harming others, lynchings. It's just incredible what they had to go through, and it's really inspiring that there are courageous people out there like them still around to tell their story," says Benjamin.

Student organizers say this semester, they were able to register more than 2,000 voters ahead of the November election.