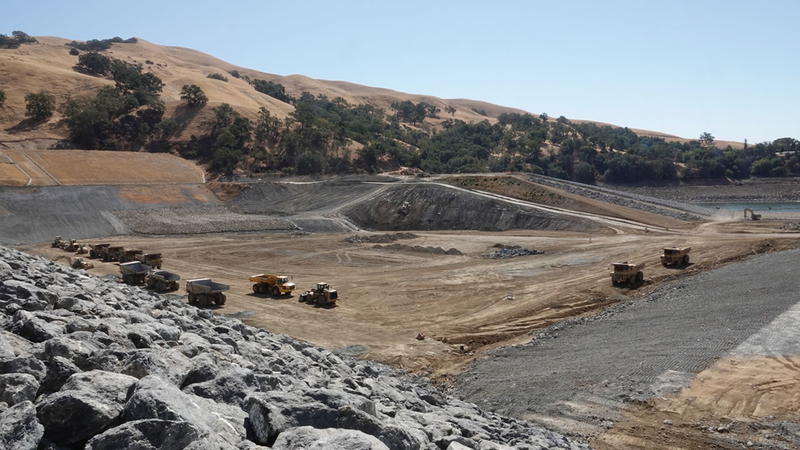 SUNOL, Calif. (KGO) -- A major milestone has been reached in the East Bay to protect drinking water supplies in the event of a major earthquake. A new dam has been completed at the Calaveras Reservoir, east of Interstate 680 in the Sunol area.

Calaveras is one of five Bay Area reservoirs that supplies drinking water to 2.7 million customers in four Bay Area counties. It's also the largest.

RELATED: Officials hope Oroville Dam spillways will be in use by Nov. 1

However, its capacity has been reduced to 40 percent due to the existing dam's seismic vulnerability.

The Calaveras Fault runs within 1,500 feet of the reservoir, and the 93-year-old dam was deemed unsafe.

A new dam has been under construction for the past two years and has now reached its full height of 775 feet. It's designed to withstand a 7.25-magnitude earthquake.

"An earthen dam like this actually has the ability to wiggle a little bit so that if there is shaking, it won't fracture because of the alignment of the fault, it should be in good shape following a really major earthquake here on the Calaveras Fault," said Steven Ritchie, Assistant General Manager of Water for the San Francisco Public Utilities Commission.

The project ran into delays and major cost overruns because of ancient landslides discovered on the site that required extensive fill work to stabilize. That doubled the cost of the dam to $823 million.

A lot of material had to be moved around to create the new dam and the environs -- enough material that it would actually fill Levi's Stadium four times.

Now that the dam is completed, the reservoir can be filled to capacity for the first time in 15 years. It promises reliability to millions of customers if Hetch Hetchy water from the Sierra is interrupted. The dam was also built wide at the base so that in future years, it can be built higher to expand storage capacity if needed.