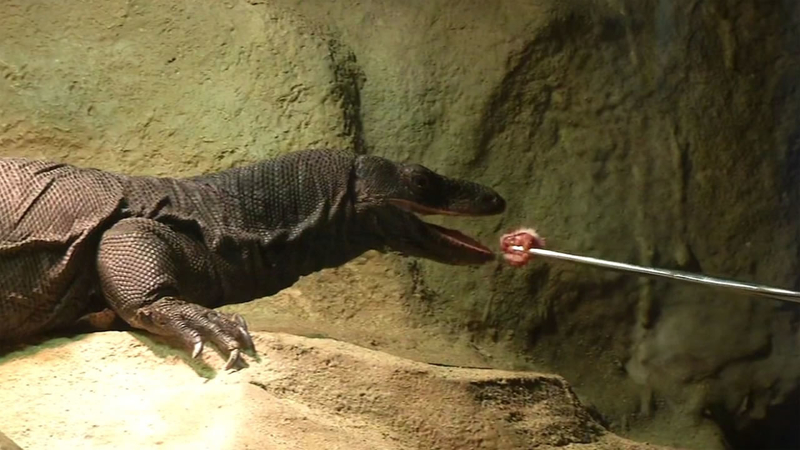 SAN FRANCISCO (KGO) -- Anyone who's trained a dog knows about the power of positive reinforcement, but some might not realize that same technique works on a lot of other animals and it can help keep them safe and stress free.

Biologists at the California Academy of Sciences in Golden Gate Park showed ABC7 News how it's done.

"We've been able to adapt what we've done for large mammals in the past and really utilize those techniques for all animals under our care," said Brenda Melton, a Steinhart Aquarium curator.

The Academy has a wide variety of creatures on display and it takes constant monitoring to make sure they're all healthy. Sometimes that means restraining animals or anesthetizing them. But now Academy biologists are using a training program to minimize that.

A zebra shark is learning to come voluntarily to biologist Pam Montbach. Every time the shark touches the target he gets food. He's even learned to eat gently out of Montbach's hand. Montbach is getting the shark used to being touched. That's important because it allows her to examine him in a very relaxed way.

"She's able to get real close and see him without having to catch him," said Jarrod Willis, senior biologist at the California Academy of Sciences.

Stingrays are also getting the same type of training. Today is a major milestone, an Academy veterinarian will check a small nick on one of the ray's wings. In the past, it would have been a big production with lots of people needed to catch the ray, but this time as soon as Montbach is in the water all the rays come over to eat. Biologists gently scoop up the ray and walk her to the side of the exhibit. The other animals stay calm.

Stingrays' tails can be dangerous, but the barb at the end of Frisky's tail has been removed. Veterinarian Freeland Dunker is able to get to work. In less than two minutes, it's over. "It all went really well," Dunker said.

A monitor lizard has also learned to let a biologist touch her without fighting back. "We certainly don't want to take a bite from an animal with 200 teeth," Willis said. The training helps with a critical part of her care, sitting still for a manicure. "Minimal restraint is minimal stress," Freeland said.

Most training happens behind the scenes, but visitors can watch penguins as they learn to step on a small scale. A biologist lures them with fish. Some step right on, but others are still pretty suspicious.

"They did pretty good, we got about half to two thirds of the birds up on the scale today," said Crystal with the Academy.

The training program is going so well the Academy hopes to expand it to a lot more species in the future.

The Academy of Sciences has special holiday exhibits running through Jan. 3.