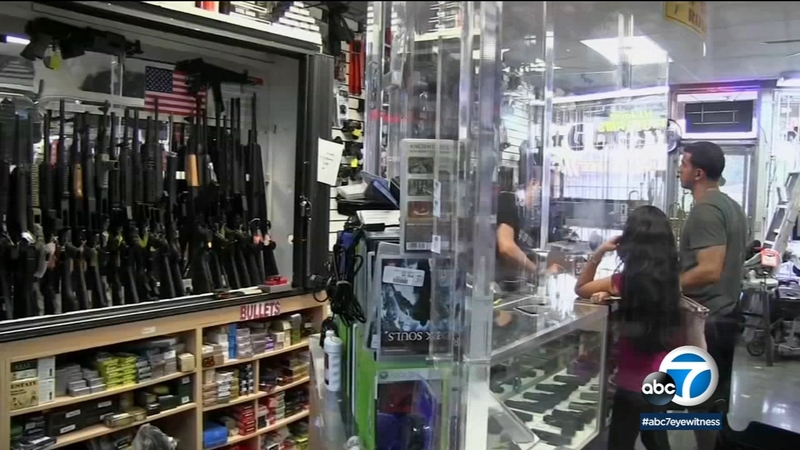 SACRAMENTO, Calif. -- California state lawmakers advanced a measure Tuesday that would make it easier to skirt a federal law in order to sue gun-makers, legislation that opponents say is ultimately aimed at driving manufacturers out of business.

They are among several bills that gained momentum from recent mass shootings, including what police now say was a gang battle that earlier this month killed six people and wounded 12 people just blocks from the state Capitol.

Democratic Assemblyman Phil Ting said his legislation would make it easier to sue gun-makers or dealers for liability in shootings that cause deaths or injuries.

Federal law blocks most of those types of lawsuits against the gun industry. But the U.S law does permit some types of liability lawsuits, including when gun-makers break state or local laws regarding the sale and marketing of their products. Last year, New York approved a first-in-the-nation law declaring such violations a "public nuisance," opening up gun-makers to lawsuits, though the law has been challenged in court by manufacturers.

California already has some of the nation's toughest firearm restrictions.

Agents investigated more than 6,600 people in 2021 through the Armed and Prohibited Persons System, known as APPS, according to a report.

Among what legislative analysts count as 107 existing California gun laws is a 10-day waiting period, background checks for buying both guns and ammunition, restrictions on types of guns including assault-style weapons, and a 10-bullet limit on ammunition magazines.

"We have done better than other states, but still not good enough," Ting said.

Gun control advocates said they have previously been stymied by the federal law when it comes to punishing manufacturers or dealers who are irresponsible or negligent in selling or advertising firearms.

Ting's bill would require firearm makers and dealers to "take reasonable precautions" under a "firearm industry standard of conduct" in making and selling their weapons. That can include things like making sure buyers are taught how to safely store and use the weapon, he said.

They also would be barred from making or distributing guns that are "likely to create a substantial and unreasonable risk of harm to public health and safety."

Starting in July 2023, violators could be sued by the attorney general, city or county attorneys, or anyone who suffered harm. They also could be sued for alleged violations of other laws, including false advertising, unfair competition or deceptive acts or practices.

"We think it provides a really good opportunity to put the power back in the hands of individuals who are the individual victims of gun violence," Ting said. "And really, what we hope is by holding this industry accountable that they will be much more thoughtful about how they sell their weapons."

The National Rifle Association said the bill's real intent is "to torment the firearms industry through costly litigation."

The bill is written so broadly that "almost anyone could bring civil action against the firearm industry," said the California Rifle and Pistol Association. "It is an attack on the lawful commerce of firearms with an intent to limit the availability of firearms."

The Assembly Judiciary Committee advanced the bill on a 7-2 vote.

A different Assembly committee voted 5-2 in favor of a bill aimed at "ghost guns," which law enforcement agencies say have spiked in recent years. The U.S. Department of Justice reported nearly 20,000 were recovered nationwide last year, nearly double those seized in 2020.

The move comes days after President Joe Biden highlighted the Justice Department's work to finalize new regulations to crack down on ghost guns, which are privately made firearms without serial numbers.

"Anyone with a credit card and skills to build Ikea furniture, and some spare time, can make the same gun that took the lives of two of my classmates and changed mine forever," testified Mia Tretta, who was shot in Santa Clarita during a 2019 attack at Saugus High School, where she is now a junior. She also spoke at Biden's announcement.

California law already requires anyone building a weapon to apply to the state Department of Justice for a serial number.

Assemblyman Mike Gipson's bill would instead block the sale of unfinished gun parts until they are regulated by the federal government. The measure would take effect Jan. 1, and give Californians who have weapons without serial numbers six months to register them and add the numbers.

Sam Paredes, executive director of Gun Owners of California, said the emphasis on ghost guns is overblown and "privately made firearms have become an unfortunate scapegoat."

Another committee advanced a measure, 7-1, to prohibit the marketing of firearms to minors, with each violation subject to a $25,000 civil penalty.

"Gun manufacturers target our kids with slick advertising, even children's books," said Democratic Assemblymember Rebecca Bauer-Kahan. "The advertising for these weapons is shameless."

But Daniel Reid, the NRA's Western regional director, said the bill would have unintended consequences including imperiling hunter education programs for young people.

"It's clearly going to fail on First Amendment grounds," he said.