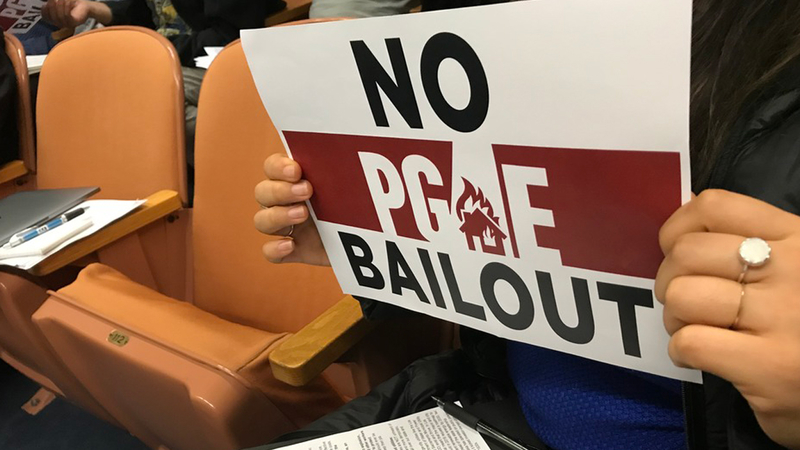 SAN FRANCISCO (KGO) -- Protestors disrupted the California Public Utilities Commission meeting Thursday over plans to allow PG&E to pass on the cost of the wildfires to consumers.

Wednesday night, a federal court judge proposed some tough new rules to prevent any more wildfires caused by PG&E. And today, the emotion spilled out at a public hearing.

Protestors used public comment at Thursday's PUC hearing to read the names of those who died in last year's Camp Fire.

And when commissioners took up a measure that places a cap on how much PG&E could pay out in wildfire lawsuits, before passing on additional costs to consumers the protestors shouted them down with, "hey hey, ho ho, PG&E has got to go."

San Francisco resident Alexander Post told the commission, "The time has come for no more bailouts and slaps on the wrist, make this a true public utility accountable to us, the people."

Post answered, "No, you're going to listen and have me finish this."

"Any wildfire that's caused by negligence of PG&E should never be paid by customers, should always be paid by shareholders," Toney told the I-Team.

This comes one day after US District Court Judge William Alsup proposed new orders to prevent any more wildfires tied to P-G-E equipment, saying the utility should:

In his proposed order, Judge Alsup accuses the utility of violating its probation in that case, by not informing the court of the investigations it faced for the 2017 North Bay firestorms.

"I think it's an extraordinary step," said Senator Hill. "And I think under most cases, or criminal cases where someone has been found guilty especially this case of six felonies in federal court and they violate probation, generally they wind up in prison

RELATED: PG&E facing possibility of bankruptcy: What that means for you

A spokesman for P-G-and-E declined an on-camera interview today, but sent a statement that reads in part, "We are committed to complying with all rules and regulations that apply to our work, while working together with our state and community partners and across all sectors and disciplines to develop comprehensive, long-term safety solutions for the future."

Judge Alsup is very clear. His aim is to reduce wildfires caused by PG-and-E to zero. He has set a hearing on this proposed order for later this month.

Take a look at more stories and videos by Dan Noyes and the ABC7 News I-Team.