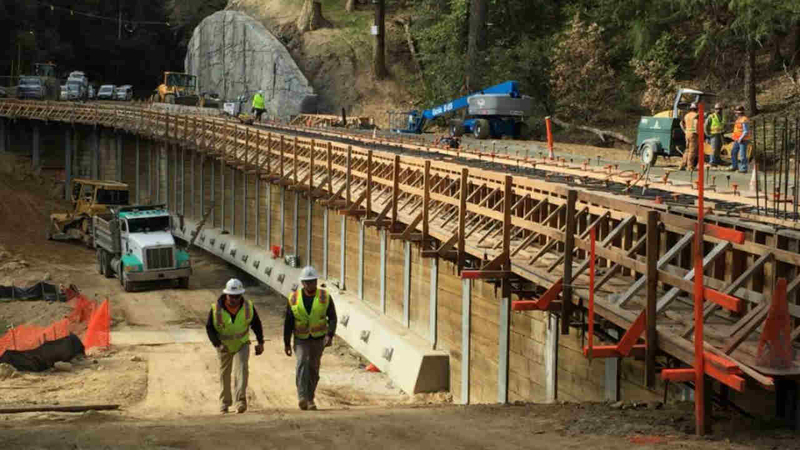 LOS GATOS, Calif. (KGO) -- Caltrans hopes to open a 220-foot section of Highway 35 in the Santa Cruz Mountains above Los Gatos by mid-January after it was wiped out by a mudslide during last February's fierce storms.

The project was "super fast tracked," meaning that Caltrans engineers were planning and designing repairs at the same time that crews from Disney Construction were already working on the project.

The $10 million project was deemed an emergency repair, and by accelerating the project, the work will be completed about a year sooner than if work waited until competitive bids and all design work were done.

The repair work was documented by time-lapse video over the past 10 months taken by two cameras mounted over the destroyed road, which shows the complexity and scale of the work undertaken by as many as 60 contractors and subcontractors at its peak.

The contractor had special challenges it had to surmount. Among them, using lightweight cellular concrete instead of traditional compacted soil and rock to fill breaches behind massive retaining walls, caused by the massive mudslide. Support beams for the retaining walls were drilled on average about 30 feet into bedrock to prevent future failures.

Close to 200 trees were lost as the slide took out the roadway. Replacement trees will be planted.

Sky7 flew twice over the site last February and March, providing some perspective on how much damage was done and how much progress has been made.