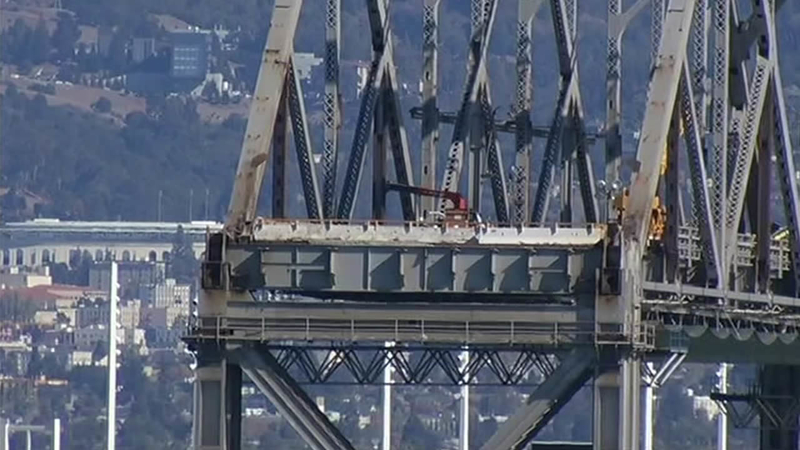 TREASURE ISLAND, Calif. (KGO) -- Your plans to drive over the Bay Bridge this Saturday may be affected by an implosion that will take place at either 7 a.m. or 1 p.m.

The bridge will be shut down as the largest pier on the old Bay Bridge will soon be nothing but rubble.

The $20 million operation is taking place underwater and it's going to happen fast. "We will be in bay for six seconds and we look forward to that happening," Caltrans spokesperson Leah Robinson said.

During the six seconds, a series of charges will break apart the 20, 000 pounds of concrete also known as Pier E3. "It is largest of all the marine foundations," Robinson said.

Caltrans said the implosion is a week behind schedule because the packaging for the explosives wasn't right.

Caltrans said it took years to get to this point in order to protect the birds, marine life and longfin smelt.

At least 1,700 of the endangered fish are expected to perish from the shockwaves.

Caltrans said Saturday's implosion will have the least amount of impact environmentally and on tax payers' pocket books. "If we had utilized the mechanical method, which would have kept us in bay for months if not years," Robinson said.

With logistics aside, some are calling this an end of an era. It was 78 years ago on Thursday the Bay Bridge first opened to traffic. "I grew up in the Bay Area and I have a deep love for the Bay Area and the bridge is part of that love," Michelle Tehelen-Steere said.

Caltrans expects the entire old Bay Bridge to come down by 2018.

20,000 lbs of concrete imploded but you won't see anything Bc it all takes place underwater pic.twitter.com/v9hD3aAtGK