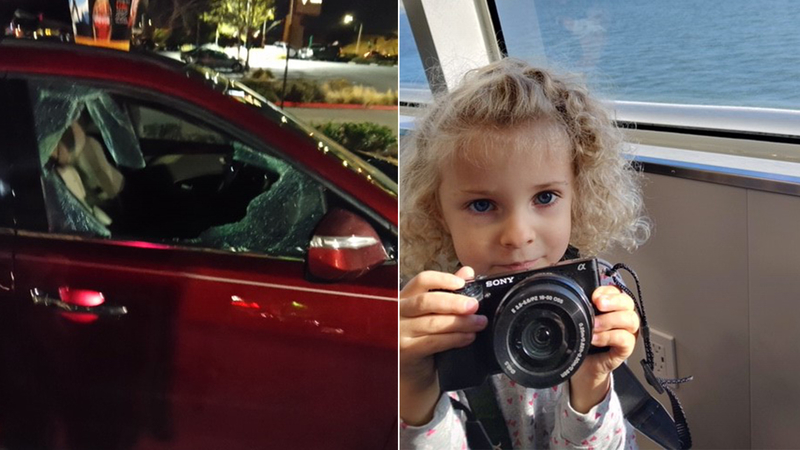 BRENTWOOD, Calif. (KGO) -- An Arizona family passing through the Bay Area during a long driving trip received a rude awakening in the parking lot of a Brentwood shopping mall after they took their 3-year-old daughter Harley to see her first movie, Frozen 2.

Harley's father Kirk Jacobson said when the family left the movie, they found the window of their red Hyundai SUV smashed, and their camera, hidden under the front seat, stolen.

Most importantly, the hundreds of pictures on the SD card inside the Sony A6000 were gone.

"Just incredibly precious things that you can't replace," said Jacobson, who told us he left the camera hidden in his car because it's not allowed in the theater.

It happened sometime between 5 p.m. and 7:30 p.m. last Sunday, in the parking lot at the Streets of Brentwood Mall, near the AMC 14 theater.

The family was in town to visit Jacobson's mother, who lives and works in the East Bay.

Jacobson reported the theft to the mall security as well as Brentwood Police. He knows the thieves likely won't be arrested, so he's making a direct appeal to them and offering a $450 reward for the return of the camera and SD card, no questions asked. He'll pay $150 for just the card.

Jacobson said it contains irreplaceable pictures of Harley and her 7-month-old brother, as well as a 70-person family reunion in Oregon and some images from the 16 hours the Jacobsons spent trapped on I-5 after the "bomb cyclone" storm that forced the closure of the freeway near Mt. Shasta.

Jacobson and his family are now back home in Arizona.

"We can eventually replace the camera, but it's the 3000-mile trip with your kids and all the little moments that happened, all the little things that you see. That's what really hurts," said Jacobson.