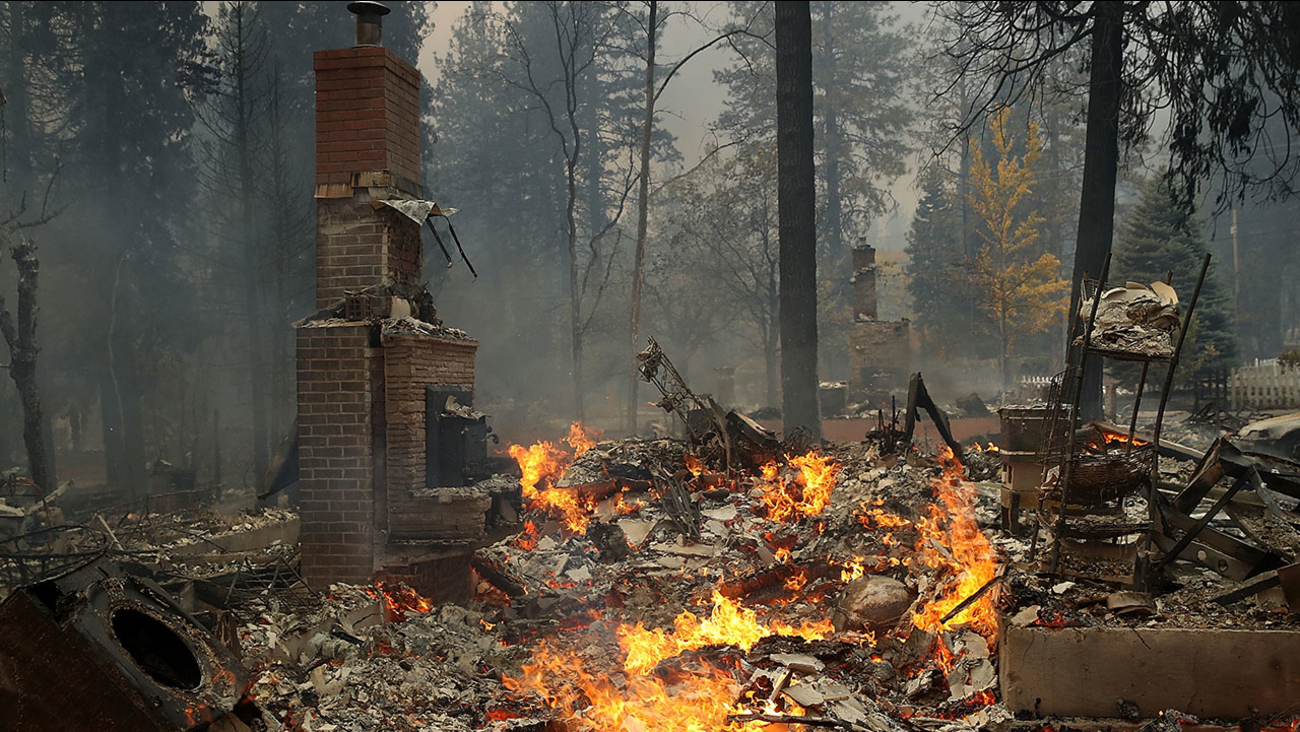 A chimney remains at the site of a home that burned as the Camp Fire moves through the area on November 8, 2018 in Paradise, California (Justin Sullivan/Getty Images)

PARADISE, Calif. -- In the 100 days since a wildfire nearly burned the town of Paradise off the map, Joanie Ellison has made a tearful drive dozens of times to the ruins of her home, resisting the urge to look away from the devastation so she can fully absorb the staggering loss.

Even as she made herself push farther into town with each painful visit - past the burned-out cars, neighborhoods reduced to rubble and forests of blackened trees standing in permanent silhouette - she couldn't bring herself until last week to stop at the crosses placed in memory of the 85 people who perished in the Camp Fire.

The memorial along Skyway Road was emotionally overwhelming and compounded the reality of the fire's ferocity, but saying a silent prayer at each cross and hoping the deaths were quick and painless moved her closer toward accepting the fire's impact .

"When you have to stop and get out and make that commitment to stand there and be with it," she said, "there's something about the truth of it that you can't deny. There's no pretending that away, the reality of it. And then seeing the names ... it's just profound."

The Nov. 8 blaze that blitzed across the Sierra Nevada foothills destroyed nearly 15,000 homes in the city of 27,000 residents and surrounding hamlets. The long recovery is just starting.

What remains of the pine and oak forest that covered this town is now alive with the buzz of chain saws, the din of heavy equipment tearing up foundations and dumping the rubble into trucks hauling the debris away. But Paradise is mostly a ghost town where survivors still dig for keepsakes in the foundations of their homes and try to figure out what lies ahead.

The smell of smoke is finally gone, and ash has turned to goo from steady rains that began falling about two weeks after the fire broke out.

Carol Beall wore white painter's coveralls to keep from getting dirty as she searched the sooty mess of the remains of her mobile home when she returned last week for the first time since the fire.

She had braced for what friends told her would look like a war zone. Still, she was moved to tears when she saw it for herself.

"The one thing that I remember about Paradise is that before the fire, you could probably see maybe a block, block and a half, because of the trees," Beall said. "Now, if it hadn't been for the rolling terrain in Paradise, I bet you could have seen from one end of the town to the other."

With use of a trowel and help from friends, she unearthed her class ring and a baby ring that belonged to one of her parents, but couldn't find a $600 necklace she was searching for. She also dug up a broken half-gallon milk jug of quarters and found a knife, fork, spoon and warped cast-iron skillet that she hopes to fashion into wind chimes.

Seeing her daffodils beginning to sprout in front of the metal frame that had been her home gave her hope, but she's not sure if she'll be able to return with her limited means on Social Security.

Around town, heavy equipment is finishing the work that flames started. Excavators, backhoes and bulldozers are digging into soil to clear wreckage that is then sorted by scrap metal, concrete and hazardous material to be trucked away.

Chad Yates co-owns an engineering firm that has two four-man crews preparing lots for reconstruction. His clients don't want to wait for the government to clean up their properties and are relying on insurance or their own means to pay an average of about $20,000.

The majority of businesses in town burned, though ones that survived have begun to reopen. Starbucks has become a hub of activity, and auto part stores, tire shops and pharmacies are operating, though most are closed at night when workers clear out of town.

Mechanic Cecil Cooper, owner of C&J Service Center, said he was busy with at least four cars in the shop Thursday because only three of 26 garages are open. Although few people now live in town, loyal customers are returning for the repairs.

At Paradise Bikes, owner Rich Colgin has cut back to working from 11 a.m. to 4 p.m. on Tuesday, Wednesday and Saturday because his house burned down and he's living 80 miles (130 kilometers) away.

He wants to provide service to the few customers in town and those willing to drive from Chico. Many of the people stopping by, though, are workers looking for T-shirts or other Paradise souvenirs.

"I'm just trying to keep it alive and help the rest of the community," Colgin said. "Try to keep the lungs breathing."

In her efforts to push deeper into town and absorb her loss, Ellison has found herself lost at times. Street signs are down. Familiar landmarks are missing.

While driving through what she calls the "chimney forest" one day, she thought she was imagining things when she passed a face of a pretty woman painted on a brick fireplace standing alone where a house had been.

It was the work of Los Angeles artist Shane Grammer, who has painted murals around the world to lift people's spirits in difficult times.

Grammer, who grew up in the area, spray-painted a dozen murals on everything from stone walls to a burned-out van. He used a transparent paint so it appears the images are burned on.

Two of the images were of Paradise residents: the young daughter of friends who lost their home, and Helen Pace, the mother-in-law of his high school basketball coach's brother.

Pace, 84, died in the fire and in his tribute to her on a charred wall standing next to a stone fireplace, she is looking slightly upward and into the distance through spectacles.

Grammer did not expect his initial murals to get any attention beyond his circle of family and friends, but they became a sensation that he said is like a miracle.

"I've spent my life learning to create artwork that connects and moves people emotionally," he said. "Without thinking about it, it happened in Paradise."

Ellison said the mural she saw was so striking it took away her sadness and made her grateful, much like spending time with the crosses.

"It just makes it feel like someone's there," she said. "That there's still a heart beating in town."