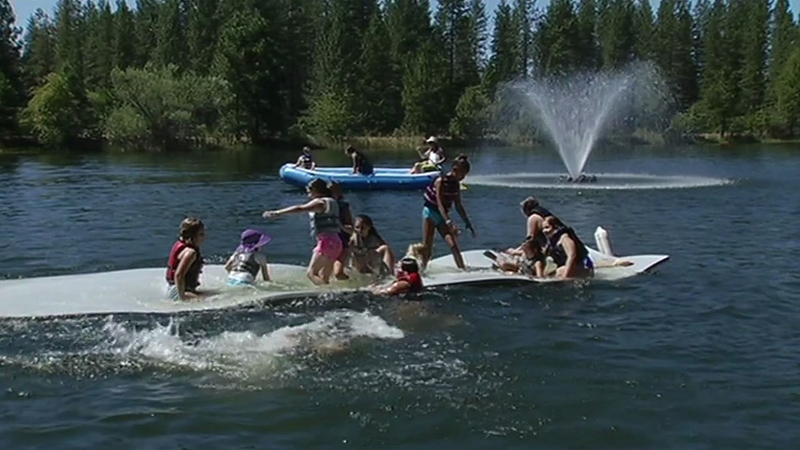 BERRY CREEK, Calif. (KGO) -- Hundreds of Bay Area families are grateful to a program that offers free summer camp for children living with cancer. Camp Okizu not only helps the children, but it also offers family camps and camps for siblings to help the entire family cope with cancer.

"There's no way any words can explain how awesome this place is, no words at all," said 9-year-old camper Isaac from Albany.

Isaac doesn't let anything stop him at summer camp, in spite of brain cancer that affected one eye when he was just a little baby.

"The tumor was in there and a piece of it had to be cut out," he said. "So I can't see in this eye, or control where it goes."

Isaac is at Camp Okizu, which provides free camp for kids with cancer, their siblings, and their families in a beautiful setting in the Sierra foothills.

They feel free there to share their stories with each other and with us.

An 11-year-old camper named Virginia says, "I had blood cancer, which is called leukemia, and I was 5 years old."

Virginia had two bouts with cancer. She needed a bone marrow transplant the second time, and her sister was a perfect match.

"She was only like 4 or 5 years old and she had to get a lot of shots and tests so I'm really proud of her and I'm really glad I survived," she said.

Twelve-year-old Ashton and his family had to make a difficult decision when he was just 8 years old and diagnosed with bone cancer.

"We decided amputation was the best idea because I could still do all athletic things still," he said. "I run, I can do anything a normal kid can do now."

We met Alec's younger brother and sister at siblings camp.

In 2014. Max and Elsa were very young when Alec was going in and out of the hospital. But his illness had an impact on his siblings.

Max is in a band called WJM, which donates its proceeds to Camp Okizu and other charities.

"Twinkie" is a counselor who volunteers her time at Camp Okizu. She was a camper many years ago. She had a rough time with cancer as a child, having leukemia at 9 and 12 years old. When she was 30, she was diagnosed with breast cancer and had a double mastectomy.

She went on to say, "I always had nursing in the back of my head, but being among other young survivors of breast cancer and being in that community, that pushed me over the edge to get into nursing to be an advocate for young adults health."

Twinkie's doctor as a child was Dr. Mike Amylon. He and John Bell are co-founders of Camp Okizu. Amylon is a bone marrow transplant specialist. Bell paid for the very first camps out of his own pocket with his travel company.

"The biggest reward for doing this is to have that big an effect on them and make them be the kind of people who want to make other people better," Bell said.

Camp Okizu added an extra weekend of family camp, with educational programs, to help families cut through red tape getting help for children returning to school.

And they recommend getting a baseline testing for children early in treatment.

"I love it here," said a camper named Kate. "It's so much fun. You can be yourself and forget about the whole cancer thing and just be you."

We're grateful to you, our ABC7 viewers for helping support Camp Okizu all these years. The need to help the kids and families continues year-round.