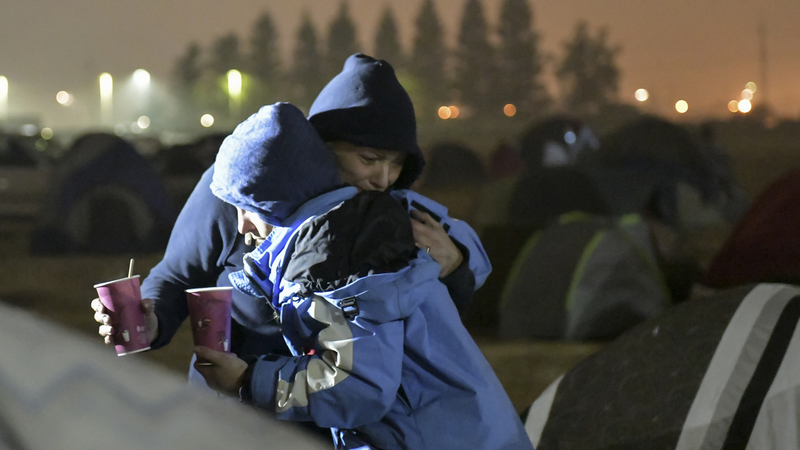 Here's the next level-- hugs, tears, and tents filling an open field in Chico.

"They didn't even have time to tell us to evacuate," said Christina Hixon, formerly of Paradise. As to the future? Who knows?

It's one more variation on a theme of escape and twisted fortune that led so many people, including her, to the tent city outside a Walmart.

This began as a place for evacuees and fire victims. Some told us tonight that Chico's homeless element has also moved in. "It's getting out of control, I think," said one evacuee. #abc7now #CampFire pic.twitter.com/rIx6ubAJs6

"I don't know what to think. I just know my home is gone."

As of Sunday, so will the encampment. On Friday, Butte County will begin moving people to an indoor, Red Cross shelter. Volunteers like Alex Hader have done the heavy lifting until now. He runs a food truck and has spent $15,000 feeding people.

"If they find a place for them, that's great."

It's a smooth operation on the surface, but difficulties appear to be surfacing.

Just very sobering. Eight days ago, these people could never have foreseen this. #CampFire #abc7now pic.twitter.com/WptSoIFgko

"What are you going to do with 50,000 people homeless, all of a sudden?" asked one camper.

There is concern that perhaps more than the fire has caused this camp to swell. "I think some of the homeless from Chico have moved in here. I don't like to generalize," said Christina.

"It's tough but they got to do it because it's getting out of control, I think," said another.

Call it too much of a good thing that's really a band-aide following a horrible wounding.

Thoughts and prayers? More like hugs, tears, and tents in a desperate time and place. #CampFire #abc7now pic.twitter.com/kA00GmknKh

When you've lost a house...and can't see a future beyond this eerie scene in a once-vacant field outside a Walmart in Chico, well... fill in your own blanks.