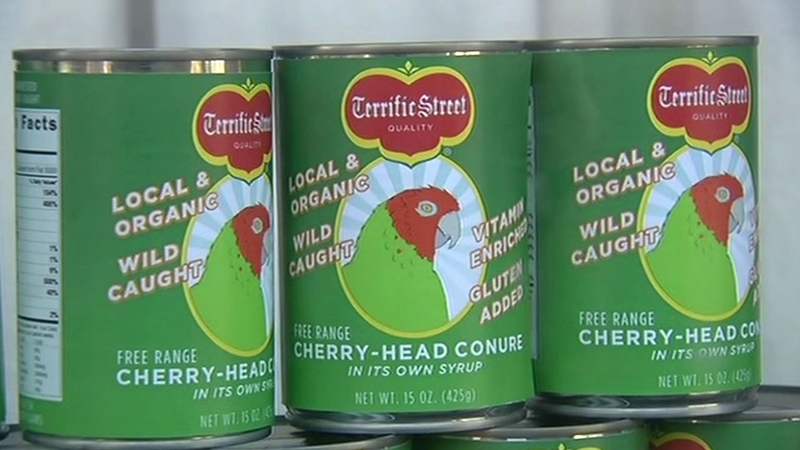 SAN FRANCISCO (KGO) -- A controversial display is turning heads in San Francisco. Some are angry while others are laughing it off. Neighbors are now left wondering -- is a display showing fake cans of parrot art or an attack on a Bay Area icon?

Traditionally, upper Grant Street in the city's North Beach neighborhood has been an artistic place; an enclave for the open-minded with inclusive natures. But then an unusual window display went up.

"I think it's poor taste," said one passerby.

Another passerby, Sherry Manning, added, "I mean, this could be one of those things when you open a can and a parrot flies out. You don't know."

If a measure of art is to promote discussion, then this storefront for a future art gallery has certainly succeeded. The problem is, not everyone around there considers it to be art.

"It is supposed to be concept art," said Mark Bittner. "But to me I just thought it was like little boy humor."

Before you castigate Bittner, consider where he's coming from.

This is the man who discovered the iconic wild parrots of Telegraph Hill, wrote a book about them, and then starred in a movie about them produced by his wife.

So now we have a window advertising fake cans of parrots at $2.99? To Bittner, that would be heresy.

"They are pure beings," he said. "They don't play the same games that human beings do."

#terrificstreet #grantstreet #northbeach Is this art? Or is it offensive to San Francisco parrot lovers? pic.twitter.com/HdFPfSdh0F

Finally, ABC7 News received a photograph of filmmaker and graphic designer Brady Baletzore who told us: "I firmly believe that walking by something you don't understand improves you day immeasurably."

"It's been awhile since we've had something like this come in," said neighbor Chauntae Moore. "Especially with the all the change that North Beach has experienced with the demographic of people who live here."
As they say, art is what you see in it.

"Sometimes I think people have too much money and not enough brains," Manning said.