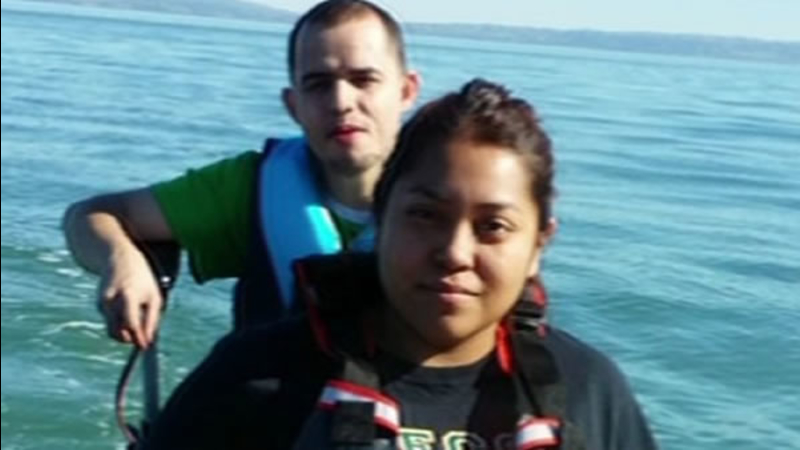 SOUTH SAN FRANCISCO, Calif. (KGO) -- It's a tragic end to the search for a fisherman missing off Oyster Point in South San Francisco.

The Coast Guard has confirmed that the deceased body they found was that of Luis Carlos Ruvalcaba, 22.

His family says he went fishing Monday afternoon on a canoe with his fiance, Larissa Casteneda, 22, and his father Guillermo Ruvalcaba, 48, when the boat starting taking on water.

Guillermo worked at San Francisco's Waterfront Restaurant along the Embarcadero and his coworkers are devastated by his death.

He was enjoying a late afternoon fishing trip with his son and Casteneda aboard a canoe that was perhaps too small to hold all of them safely.

"I'm like well I don't think it's a good idea going in that thing fishing. It's pretty small," victim's brother-in-law Antonio Pulido said.

Pulido thought the 12-foot canoe his nephew Luis Carlos bought a few weeks ago was unsafe. "The boat tip over. Carlos jump out of the boat flip it back and I guess it flip again," he said.

The three were stranded in the water off Coyote Point, but were kept afloat only by their life jackets.

"At some point, the young male decided to swim to shore, which he could see to try to get help," US Coast Guard Public Information Lt. Jacob Olner said.

Officials got a report from their family that they were missing at 10:20 p.m.

In the early morning, they heard Castenada's cries for help in the dark and were able to rescue her.

But a half hour later, they found Guillermo's body. Then, they found his son Luis' body at 8:50 a.m. They both apparently died of hyperthermia.

Owner Al Falchi says he was a great employee. "He was the type of guy that I'd show up here early in the morning and he'd be waiting to get in," he said.

Luis Carlos had just joined a security company that assigned him to Seton Medical Center, where he had only worked a week. "Immediately he had a wonderful impact on us here in the office, but also at the location where he was assigned," Corporate Security Service Vice President Ave Seltsam said.