KGO
By Dan Noyes
SAN RAFAEL, Calif. (KGO) -- A fixture in Bay Area veterans groups has been keeping a secret for more than a decade, and now that it's been uncovered by the ABC7 News I-Team, the man is under investigation by at least two federal agencies.

Dan Noyes has spoken to so many people about "Lieutenant" Greg Allen, and none of them knew he is a convicted felon or that he has been lying about his service record. He has fooled people, gained their trust, sometimes taken their money, and now, you're going to hear the truth.

Reconnaissance Marine Simon Duvall from Marin County is in the Philippines right now on a joint exercise. Noyes spoke to him by satellite phone this week about the training he received during high school, at a gym in San Rafael: "I thought it was a good experience, learned a lot from Lt. Allen, the man who runs the place, and definitely prepared me, gave me an upper edge."

At first, Allen opened the "Fitness Boutique" with a "smile" sign over the doorway. Then, 10 years ago, fitness boot camps became popular, so he remodeled the boutique into the "House of Steel" featuring Marine-style workouts for soccer moms and for teens who want to join the military.

Before the sun is up, you can see boys and girls training at the gym off 4th Street in San Rafael and in the parking lot of the nearby Whole Foods.

Allen also upgraded his image -- adding a Marine uniform and a bunch of medals, including a Purple Heart, a Bronze Star with "V" for valor, and a new title -- first lieutenant.

Duvall told Noyes, "We definitely knew he was a Reconnaissance Marine, a scout sniper and someone to look up to."

Allen told his young clients war stories and the local paper quoted him in a profile saying, "I am a Vietnam veteran. I was in a lot of conflicts; there are ones I mention and ones I don't. I did two tours and was active from 1967 to '74."

Allen was so convincing, he became president of the Military Officers Association of America, Marin Chapter. He joined the Marin United Veterans Council, and had his clients perform color guard at holiday parades.

Ray Mullin is president of the Marin United Veterans Council. He said, "I like Greg, I like his attitude, his direction, how he presents himself, his Marine Corps je ne sais quoi."

Even when Noyes raised questions about Allen's credentials, veterans stood by him at the American Legion post in Larkspur. Jackie Tribolet said, "I'm going to stick with believing Greg until Jesus comes down from heaven and tells me otherwise."

Allen bristled when Noyes approached him about his service.

The I-Team obtained Allen's service records under the Freedom of Information Act. And they show everything he has said about his military history is a lie. Allen was never in the Marines, never a lieutenant, never served in Vietnam and did not earn those medals.

Allen did enlist in the Navy, but was discharged after only eight months because of a pre-existing knee injury from high school football.

Allen declined to show Noyes his DD-214, which are discharge papers that every service member receives from any branch of the military.

The extent of Allen's lies shocked the real veterans Noyes met at a Marines Memorial event to mark the 50th anniversary of the Vietnam War.

Paul Bucha is one of only 79 Medal of Honor recipients still alive. He tells Noyes, Vietnam vets had to count on the respect and accolades of their peers, and that Allen's lies are serious. He told Noyes, "Someone like this comes in and tries to horn in on that and steal that and misuse it through misrepresentation, it's disgusting."

Bill Waldrop, a Purple Heart recipient, was stunned to learn the news.

Waldrop: "He never served?"
Noyes: "He was never in the Marines."
Waldrop: "Oh, my God. Can you introduce me to him?"

Carroll Starling, who was a Navy Chaplain during Vietnam, said, "If they're saying that and putting that on, they've got more problems than an algebra book." 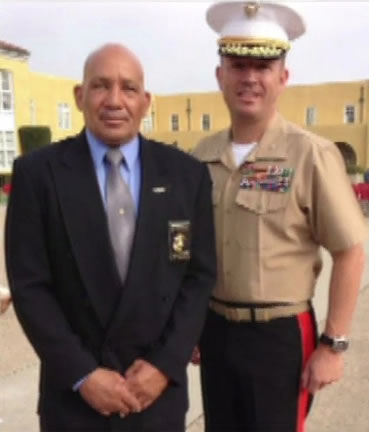 He posted a picture on his Facebook page with the general at the Marine training center in San Diego. Noyes contacted the general's office and now Allen is banned from all Marine functions and facilities. No Marine recruit is allowed to work out at the House of Steel.

Allen allowed Noyes to snap a photo of his VA healthcare card with the Marine insignia. The VA's Office of Inspector General is investigating if he fraudulently obtained benefits. 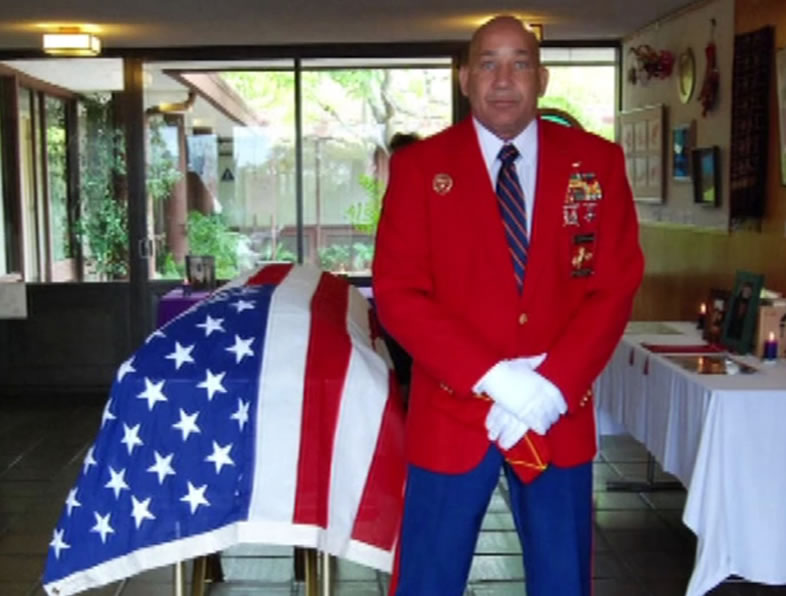 And then there's this -- Allen is seen in a photo, wearing all his phony medals, standing in front of the casket of a young Marine from Marin County who died in service.

Peacock saw the picture of Allen standing in front of the casket and set the wheels in motion. The FBI has launched a criminal investigation into whether Allen raised money based on his phony persona. One man tells Noyes he gave Allen $5,000 at a House of Steel Fundraiser because he thought Allen really was a Marine lieutenant.

Col. Peacock says, "And if he's not guilty, that's great. But if he is, let's make sure that he pays the price because that Marine in the casket really paid the price."

Then, there's Allen's felony record. He received a sentence of three years in state prison after violating a restraining order when he climbed in his wife's bedroom window, threatened to cut her throat and shoot her. At the time, he blamed his drug addiction.

So many people can't believe this is the man they trusted with their sons and daughters, and with their money, in some cases.