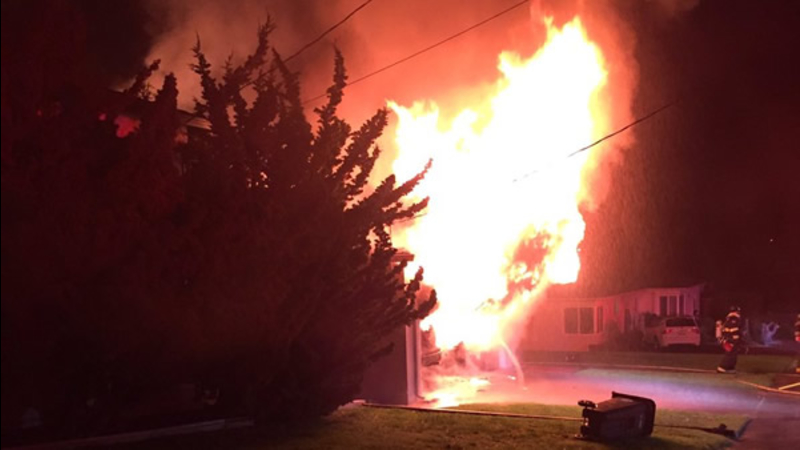 CASTRO VALLEY, Calif. (KGO) -- Officials are investigating after a Castro Valley 59-year-old woman was killed inside her home after a fire broke out in the attic early Tuesday morning.

59-year-old woman found dead inside her Castro Valley burning home at 2:45am. She was in garage- don't know why yet. pic.twitter.com/hHcavlE61t

Firefighters responded to the 1800 block of Grove Way at about 2:44 a.m. and fully extinguished the blaze within 10 minutes.

Fire officials can't figure out why she couldn't get out alive or why she was in her garage.

Neighbors first smelled smoke, but couldn't figure out where it was coming from because this was burning in the attic. It was a couple hours later when they came out and saw the flames, but by then it was too late.

Neighbors were shocked when they went outside and saw the house on fire. "It was quite scary the flames were quite high and coming out front of garage it was really frightening," victim's neighbor Kim Mihalyi said.

They were especially upset when they realized their neighbor was inside the burning home. "We were devastated, we were hoping she would be in the backyard, we even looked and when we heard it was unbelievable," victim's neighbor Rob Mihalyi said.

"It is unknown what she was doing in the garage. The origin of the fire was the attic, right now there is a joint investigation between fire and sheriff taking place customary in fatality," Alameda County Sheriff's Office spokesperson Aisha Knowles said.

Neighbors say the woman was a widow who lived alone and that she has two adult daughters. "She was one of the sweetest women you will ever meet, genuine nice lady, we are going to miss her a lot," one neighbor said.

A firefighter sustained a minor injury and was transported to a local hospital.

Update: a 1-alarm house fire on the 1800 block of Grove Way in #CastroValley is under investigation. One confirmed fire fatality. pic.twitter.com/c392CnHALn