The California Highway Patrol says the man who led authorities on a 100-mile high speed chase across the Bay Area was intoxicated and was still trying to escape even after he crashed.

VALLEJO, Calif. (KGO) -- The California Highway Patrol was able to safely end a high-speed chase Tuesday that went through four Bay Area counties and ended in a spectacular crash. Amazingly, the driver wasn't seriously hurt and no other drivers in that 100-mile pursuit were hurt.

The CHP says the driver appears to have been under the influence to the degree that he was surprised when he got out of his car and saw the damage to his SUV after he crashed. The driver was still trying to escape with officers pointing Tasers and guns at him.

The 90-minute wasn't over after the driver crashed and rolled over on the Peninsula. He was still trying to get away. The CHP realized this after reviewing SKY7 HD footage of the dramatic crash.

It appears Ramon Bernal wasn't about to let his crash stop his efforts to elude the CHP officers chasing. Once the SUV overturned and landed up-right, 24-year-old Davis resident didn't get out. Instead, smoke was seen coming from the right rear. Bernal was gunning the engine.

It's something CHP officer Daniel Hill spotted as he reviewed SKY7 HD video of the pursuit and crash at division headquarters in Vallejo.

"You can see the right rear tire was actually still spinning the entire time," said Daniel Hill, a spokesperson for the Golden Gate Division. "It would appear the suspect yo can tell the point when he exits the vehicle had his foot on the accelerator trying to continue to drive away."

Hill has been in 70 pursuits himself, but they're usually over in under 10 minutes. This one lasted an hour and a half, even after officers deployed a spike strip like this one along southbound Interstate 680 in the Sunol area, just south of Pleasanton.

"It seems that he's surprised that the vehicle is damaged itself. He's not reacting to law enforcement commands," Hill said. "He does seem to notice them and walk toward them, not in a way a normal person would comply."

Ramon Bernal is still at Stanford hospital where the CHP says he is on a 72-hour hold for evaluation. He'll then be taken to jail.

The spike strip that was deployed during the strip is studded with hollow spikes. The strips are covered for officer safety. When a vehicle runs over them, they embed in the tread, letting the air escape. They're designed to cause a driver to stop within a minute or two; however, Bernal kept going. The tires disintegrated. The rims eventually did the same, leaving only rotors.

CHP decided calling off the pursuit was not a good idea.

"The risk of the public being injured by the pursuit was being outweighed by the benefit of stopping this driver from putting other people at risk by his bad driving," Hill said.

Bernal faces felony charges for failing to stop and for being under the influence.

VIDEO: A high-speed chase ended in a rollover crash in the Los Altos Hills area 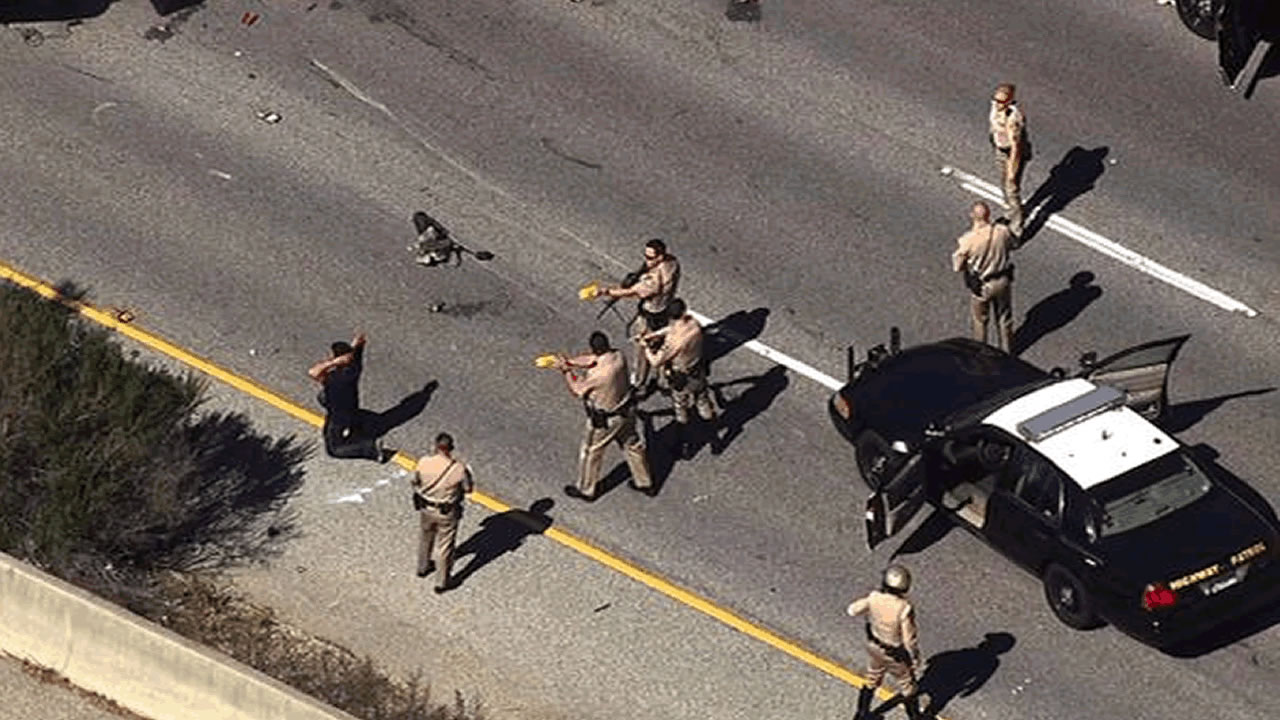