Police said the group of four male suspects and three female suspects spray-painted "The Bean" and left the iconic sculpture tagged with gang graffiti. Investigators said they showed up overnight to Millennium Park armed with cans of spray paint and started vandalizing.

First, police said the group targeted "The Bean" sculpture, covering the artwork in spray paint. Then the suspects sprayed graffiti on the Cancer Survivor Wall and several park benches and trash cans at Maggie Daley Park.

Crews clean off graffiti on 'The Bean' in Millennium Park Wednesday morning.

"When I walked across there near the entrance there are a few benches tagged in the same way," said Chicago resident Candice Wells.

Crews got to work to remove the graffiti Tuesday morning, scrubbing away at the white spray paint with special chemicals. The crews hope the vandalism will not damage the iconic sculpture.

WATCH: Here's what it takes to clean the Bean
EMBED More News Videos

Whether it's summer or the middle of a snowfall, the Bean always has a shiny finish.

The Chicago Park District said that the graffiti in Maggie Daley Park has been removed.

Mayor Lori Lightfoot was livid speaking about the vandalism.

"It is unbelievable unacceptable for people to be defacing something like that," she said.

Mayor Lightfoot said the vandals will be held accountable.

"There are some things that should be sacred," she said. "Millennium Park and The Bean have been an important, iconic part of who we are as Chicago."

People who came to visit the parks ahead of the busy 4th of July holiday weekend were disappointed that the vandals targeted the landmarks.
"It is a beautiful spot and definitely iconic, a great spot to visit," said Mary Potter, a Seattle resident visiting Chicago. "It is a bummer for sure, but there are other areas we can take pictures. Hopefully, they get it cleaned up soon."

The Department of Cultural Affairs and Special Events released a statement saying, "Last night's vandalism to Chicago's iconic 'Cloud Gate' is reprehensible. Crews are in the process of removing the graffiti."

The sculpture cost millions of dollars to build and has been part of Millennium Park for 15 years. "The Bean" is made from 168 steel plates. Fabrication started in 2002 and took more than two years to complete.

"It is an important element of the city and I think we need to conserve it in the right way," said Chicago resident Marco Ugarte.

The stainless-steel skin was attached to the internal structure of "The Bean." That lets it expand and contract during Chicago's extreme weather shifts.
Report a correction or typo
Related topics:
chicagograffitivandalismmillennium parku.s. & world
Copyright © 2021 WLS-TV. All Rights Reserved.
RELATED 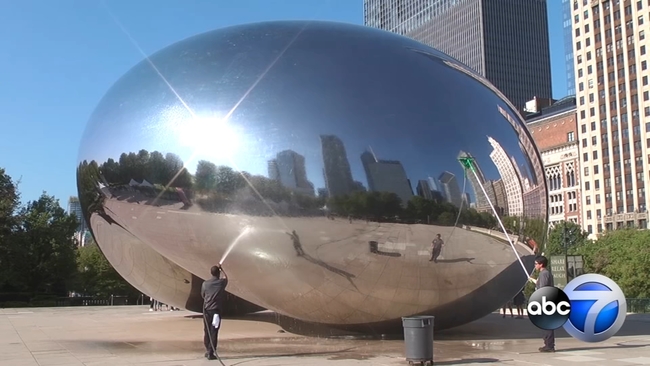