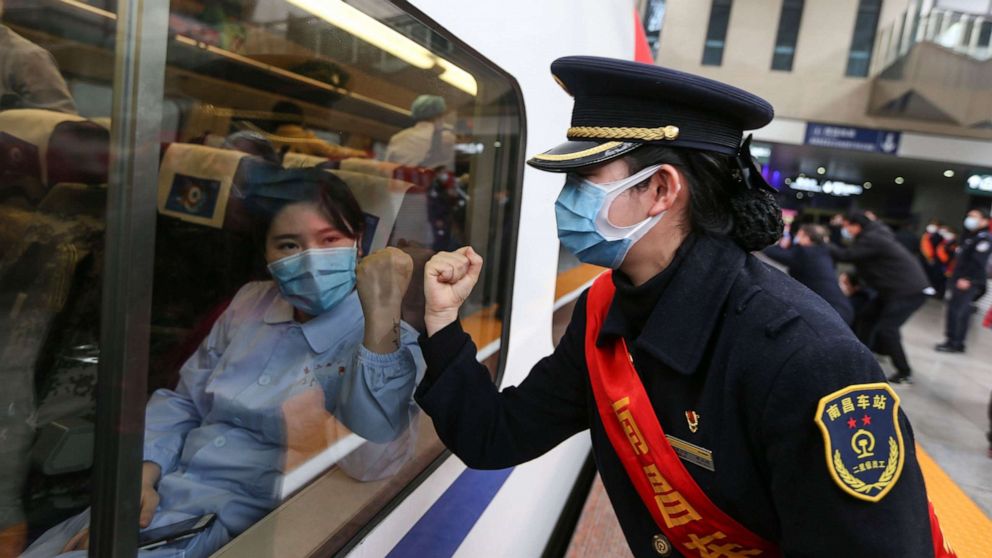 Chinese health officials have revealed for the first time the number of frontline workers who have been infected by the novel coronavirus.

Zeng Yixin, vice minister of China's National Health Commission, told reporters Friday that 1,716 medical workers have tested positive for the newly discovered virus, known officially as COVID-19, and six of them have died. Most of the workers were in Hubei, the province at the center of the outbreak since the first coronavirus cases emerged in its capital, Wuhan, back in December.

"At present, the duties of medical workers at the front are indeed extremely heavy," Zeng said at a press conference Friday. "Their working and resting circumstances are limited, the psychological pressures are great and the risk of infection is high."

"This is a critical piece of information, because health workers are the glue that holds the health system and outbreak response together," Dr. Tedros Adhanom Ghebreyesus, director general of the World Health Organization, said during a Friday news conference in Geneva.

A team of international experts, led by the WHO, will convene in China this weekend and work with local scientists to investigate the outbreak.

Americans should prepare for the possibility of community spread of COVID-19 while "hoping with the measures we've taken, we'll be able to prevent it," Dr. Nancy Messonnier, director of the National Center for Immunization and Respiratory Diseases, said Friday at a news conference.

To that end, the Centers for Disease Control and Prevention is tapping into existing influenza surveillance systems to create an early warning system for novel coronvirus. The program will start in public health labs in Los Angeles, San Francisco, Seattle, Chicago and New York City until a national coronavirus surveillance system is established.

If that early warning system is triggered, the country's response strategy will change and could include mitigation strategies, such as social distancing, school closings, canceling mass gatherings, telemedicine, teleworking and teleschooling.

So far there are only 15 cases confirmed in the United States, according to the CDC. The patients are in Arizona, California, Illinois, Massachusetts, Texas, Washington and Wisconsin. All but two of the U.S. cases are linked to travel to Wuhan, China.

While there have been a few reports of disease transmission among people who were asymptomatic, "we do not believe these last two forms of transmission are the main drivers of spread," Messonnier said.

Hubei province reported a nearly tenfold increase in cases on Thursday morning after health officials applied new methodology to how cases are categorized.

The Health Commission of Hubei Province explained in a press release that the record spike was due to a change in how cases are diagnosed and counted, with the total number of confirmed cases now including "clinically diagnosed cases," or patients who showed symptoms of the disease and were diagnosed through CT scans of the lungs, for instance, but have not yet had laboratory testing.

The expanded criteria is meant to ensure "that patients can receive standardized treatment according to confirmed cases as early as possible to further improve the success rate of treatment," the commission said.

Dr. Mike Ryan, executive director of the World Health Organization's Health Emergencies Program, said at a press conference Thursday that the overnight increase in cases from China shouldn't be considered a spike since they are being retrospectively reported.

"We need to be cautious when drawing conclusions from daily reported numbers," Ryan told reporters. "We need to be very careful when reporting any extremes."

There are at least 447 cases confirmed in 24 other countries, according to the WHO, which has declared the outbreak a global health emergency. There's been one death in Japan and one in the Philippines, bringing the global death toll to three.

COVID-19 causes symptoms similar to pneumonia, ranging from mild, such as a slight cough, to more severe, including fever and difficulty breathing, according to the CDC. There is no vaccine yet for the virus, nor any known effective therapeutics.

Meanwhile, a cruise ship quarantined at sea in Japan has become the largest center of infection of anywhere outside China.

Since the Diamond Princess arrived at the Japanese port of Yokohama on Feb. 3, at least 218 people on board have tested positive for the new coronavirus. At least one quarantine officer has also been infected, according to Japan's Ministry of Health, Labor and Welfare, is leading and coordinating the public health response on board.

All those infected with the disease on the Diamond Princess have been brought ashore for treatment, while the other passengers have been confined to their rooms on board as the ship remains quarantined at sea.

However, Japan's Ministry of Health, Labor and Welfare announced Thursday its plans for a voluntary disembarkation of guests to complete their quarantine period at a shoreside facility.

A spokesperson for Princess Cruises, which operates the ship, said "it is our understanding that this will be a phased approach, with the most medically vulnerable guests in the first phase, including older adults with pre-existing health conditions."

"According to officials, guests in the first group will be tested for the 2019 novel coronavirus," the cruise line spokesperson said in a statement Thursday. "If the test is positive, they will be transported to a local hospital for further evaluation and isolation. If the test is negative, they will be given the option to leave the ship and be transported to a quarantine housing facility."

All guests aboard the Diamond Princess "remain welcome to stay on board through the end of the quarantine period," the spokesperson added.

Earlier in the week, the spokesperson told ABC News that 23 Americans were among those who had tested positive for COVID-19. It's unclear whether any additional U.S. citizens have been infected since then.

Approximately half of all people who were onboard the Diamond Princess are from Japan, while more than 400 passengers are from the United States, according to the cruise line spokesperson.

In a video message posted online Wednesday, Dr. Grant Tarling, chief medical officer for Princess Cruises, revealed that the original case was a guest who had traveled on the Diamond Princess from Yokohama to Hong Kong between Jan.20 and Jan. 25 was diagnosed with COVID-19 in a Hong Kong hospital on Feb. 1, six days after leaving the ship.

"The guest did not report any illness to the medical center while on board," Tarling said. "On learning this information from the Hong Kong health authorities, we immediately worked with the Japanese Ministry of Health who quickly developed a response plan. All guests and crew were evaluated for symptoms of the illness and the first batch of several hundred laboratory samples was taken from individuals with symptoms or suspected to have been exposed to the virus. We were advised that a number of those tests came back positive and the ship was placed under quarantine on Feb. 5, and since then, the Japanese Ministry of Health has continued to test people with symptoms and other risk factors."

"I understand you may be very anxious when you hear more confirmed cases," he added. "However, health authorities expected additional cases to be identified given the original case likely exposed others and their close contacts between January 20 and February 4."

Tarling said most cases on board have "mild to moderate symptoms, like a common cold or flu, and some have no symptoms." More severe symptoms have been seen among a small number of individuals, typically those with pre-existing medical conditions.

"The World Health Organization and the U.S. Centers for Disease Control believe that the virus spreads mostly from direct person-to-person contact with ill people, such as when they are coughing and sneezing," he said. "These health authorities state there is no current evidence the illness spreads through the air ventilation systems. However, in an abundance of caution, we have maximized fresh air into all cabins. "

Japanese health officials have advised that the 14-day quarantine period will end on Feb. 19, according to Tarling.

"However, as the situation is evolving daily," he added, "we do not know at this time what measures, if any, will be required before or after that date."

Natalie Costa, the cruise director aboard the Diamond Princess, posted a video message online Thursday, saying, "We are all hanging in there, doing fine and keeping together as a big family."

"A lot of questions coming in about what we're doing during the day," Costa continued. "It changes, changes from hour to hour. We're manning the photos were getting deliveries out, different games and puzzles."

"Wherever we're required," she added, "that is where we are."