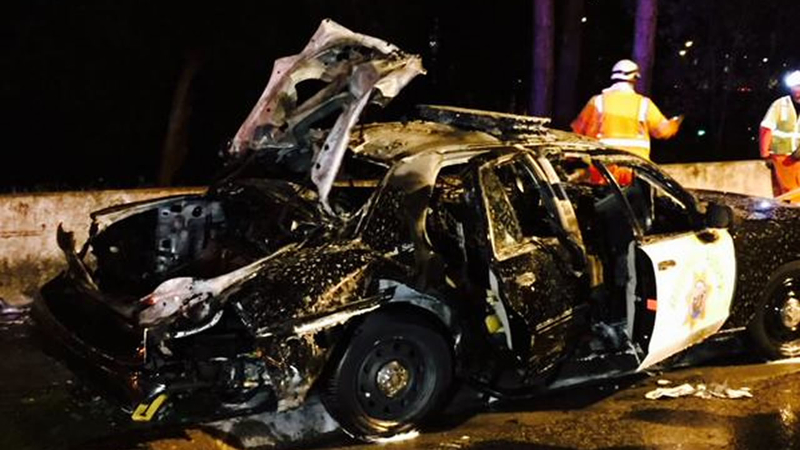 Earlier CHP Ofrc on Bay Bridge when he saw smoke in p/v. He pulled off at T.I. before fire started. pic.twitter.com/6U2rqGhDQU

The CHP officer smelled smoke coming from his trunk, so he quickly got off the ramp to Treasure Island just before his car erupted into flames. The officer called for help and shortly after two CHP officers got out of their cars to assist. The trunk then exploded.

One CHP Officer suffered minor injuries from flying debris. He is being checked out at hospital. pic.twitter.com/m6mtYlVZqT

"We saw an oxygen tank in there because we do carry oxygen in our EMT kits and that looked like it had exploded, so that could be a cause," said CHP officer John Zatezalo. "It could be the fuel tank. We do have flares in there as well."

One officer was hit in the arm with shrapnel. The other suffered from smoke inhalation. Both were taken to San Francisco General Hospital with minor injuries.

San Francisco firefighters responded to the scene and extinguished the blaze, a fire dispatcher said.

The CHP says it does not carry ammunition in their trunks.

The cause of the explosion is still unknown, but investigators will be examining the patrol car more closely Tuesday morning.