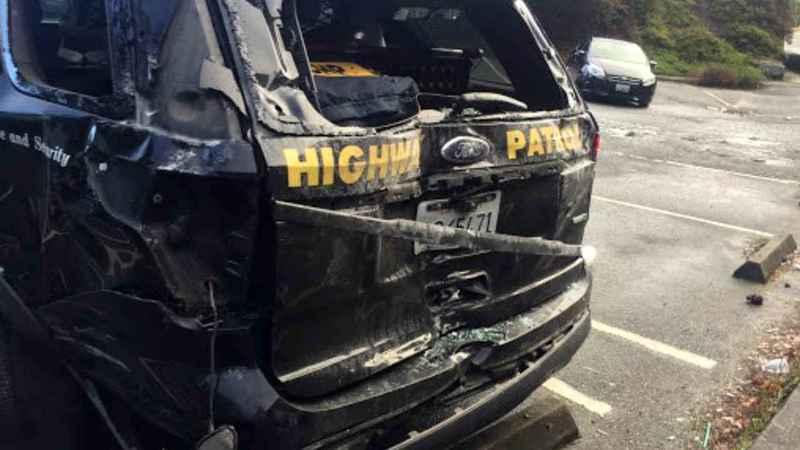 SAUSALITO, Calif. (KGO) -- This holiday weekend has been a dangerous and deadly one on Bay Area roads. Rain and slick pavement has contributed to several accidents, including a serious one which sent a CHP officer to the hospital.

It happened Saturday morning in Sausalito on southbound Highway 101.

Two CHP Officers were on scene of a vehicle which had spun out near Spencer Avenue. Moments later, authorities say the driver of a Toyota Corolla lost control of her car and was headed towards one of the officers.

#CHP says driver who struck a CHP unit on Hwy 101 in Sausalito this morning has died from her injuries. pic.twitter.com/94MkqC7ot0

"We are fortunate the officer could see the car coming and react, he jumped into the back of the patrol car seconds before the car collided with it," said CHP Officer Andrew Barclay.

Sadly, the driver of the Corolla did not survive. She died later at Marin General Hospital. Her name has not yet been released.

The CHP patrol car was heavily damaged from the collision and its back window was smashed.

"It was a scary day, it was foggy, rainy and roads were wet," said witness Ed Atherton.

The CHP says weather and slippery pavement was a contributing factor to the crash.

@CHPMarin unit involved in accident on 101 S. in #Sausalito, reportedly rear ended by another car. One officer was injured, a second driver was taken to hospital. #abc7now pic.twitter.com/ywghrWZTpb