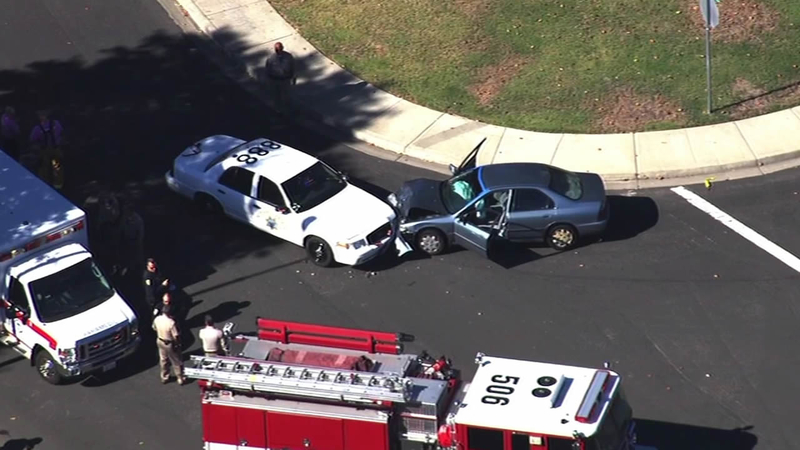 BRENTWOOD, Calif. (KGO) -- A CHP officer is recovering after his patrol car was rammed head on during a pursuit in Brentwood Thursday afternoon.

Police said the suspects are in custody and the officer is going to be OK.

The driver of a light blue Honda Accord was pulled over in Brentwood because the car had no license plates.

Authorities said the driver first slowed to a stop, but when the CHP officer walked toward the car he took off. "A short pursuit was initiated. One of our patrol cars and one of our motorcycle units were involved in it, came in through a couple of surface streets over here and they came down Surrey Way, here. The Honda Accord went down the street," McCarthy said.

The pursuit ended on Surrey Way, which is a dead end street.

Sky7 HD was over the scene and showed two guns with high capacity magazines that CHP officials says were wrapped in a sweatshirt and were tossed out the window. McCarthy said the driver then made a u-turn and headed straight toward the CHP cruiser. "As the patrol car came to a stop, the Honda Accord accelerated forward and struck the patrol car in the front," McCarthy said.

The passenger surrendered, but authorities said the driver got out and ran through backyards in the neighborhood before being caught.