Minister: Texas gunman who killed 2 grew angry in past over cash requests 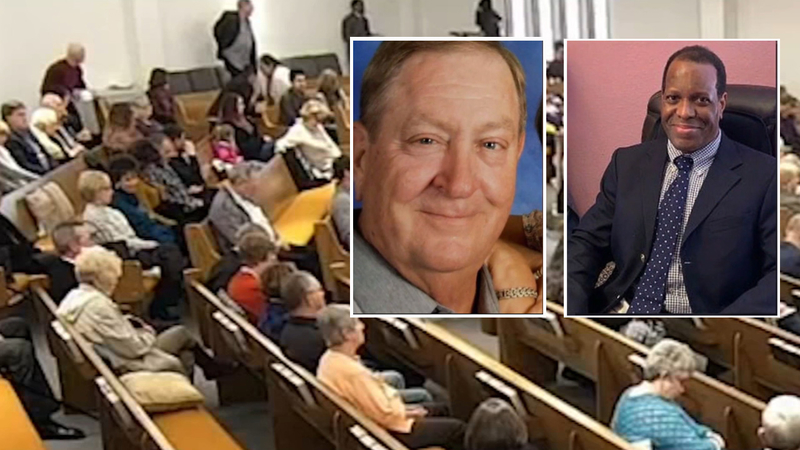 WHITE SETTLEMENT, Texas -- The man who opened fire inside a Texas church, killing two people before being shot to death, visited the church several other times this year and was given food but got angry when officials refused to give him money, the minister said.

Keith Thomas Kinnunen, 43, brought a shotgun into the West Freeway Church of Christ in the Fort Worth-area town of White Settlement during Sunday services and opened fire, killing church members 67-year-old Richard White and 64-year-old Anton "Tony" Wallace, according to police. Witnesses said he was wearing a fake beard, a wig, a hat and a long coat, which drew the attention of the church's security team.

Minister Britt Farmer told The Christian Chronicle that he recognized Kinnunen after seeing a photo of him without the disguise.

"We've helped him on several occasions with food," Farmer said in the interview. "He gets mad when we won't give him cash. He's been here on multiple occasions."

Authorities said Kinnunen's motive remained under investigation. He was fatally shot by Jack Wilson, a member of the church's volunteer security team, within seconds of the attack.

"The only clear shot I had was his head because I still had people in the pews that were not all the way down as low as they could. That was my one shot," Wilson said Monday from his home in nearby Granbury, adding that several other churchgoers had their weapons drawn as well.

RELATED: What we know about the man who shot, killed Texas church attacker

The actions of Wilson and other armed churchgoers quickly drew praise from some Texas lawmakers and gun-rights advocates. Texas officials hailed the state's gun laws, including a measure enacted this year that affirmed the right of licensed handgun holders to carry a weapon inside places of worship unless a facility bans them.

President Donald Trump tweeted Monday night and Tuesday morning about the attack, both times highlighting the role of armed citizens in stopping the shooter. "If it were not for the fact that there were people inside of the church that were both armed, and highly proficient in using their weapon, the end result would have been catastrophic. A big THANK YOU to them!" Trump tweeted Tuesday.

Our prayers are with the families of the victims and the congregation of yesterday’s church attack. It was over in 6 seconds thanks to the brave parishioners who acted to protect 242 fellow worshippers. Lives were saved by these heroes, and Texas laws allowing them to carry arms!

But other Texas lawmakers, while praising the churchgoers' actions, called for a special legislative session to address gun violence after a devastating year that included mass shootings in El Paso and the West Texas cities of Odessa and Midland.

"As lawmakers, we must come together to address the rise in gun violence we have seen in Texas," state Sen. Beverly Powell, D-Fort Worth, said in a statement Monday. "Yesterday's gunman had a long criminal record, including charges of aggravated assault and possession of an illegal weapon. We must respect the Second Amendment while also working together to keep guns out of the hands of those who wish to do harm to Texans worshiping in a church, attending school or shopping for their children."

Two security volunteers at the church fired back at the gunman, killing him. Approximately 242 others were in the sanctuary at the time, authorities said.

Tiffany Wallace, daughter of victim Anton "Tony" Wallace, told Dallas TV station KXAS that her father was a deacon at the church and had just passed out communion when the gunman approached him.

"I ran toward my dad, and the last thing I remember is him asking for oxygen, and I was just holding him, telling him I loved him and that he was going to make it," Wallace said. "You just wonder why? How can someone so evil, the devil, step into the church and do this."

Wallace's grandson was also inside the church at the time.

"The gunman just stood up and turned around to him. So probably like three feet away from my papa," the boy said. "It's kind of heartbreaking, but sometimes you gotta be strong about it and just keep on going."

Isabel Arreola told the Fort Worth Star-Telegram that she sat near the gunman in White Settlement and that she had never seen him before. She said he was wearing what appeared to be a disguise and made her uncomfortable.

"I was so surprised because I did not know that so many in the church were armed," she said.

Richard White's daughter-in-law, Misty York White, called him a hero on Facebook: "You stood up against evil and sacrificed your life. Many lives were saved because of your actions. You have always been a hero to us but the whole world is seeing you as a hero now. We love you, we miss you, we are heartbroken."

Investigators searched Kinnunen's home in nearby River Oaks, a small city where police said his department's only contact with the gunman was a couple of traffic citations. But Kinnunen appeared to have more serious brushes in other jurisdictions. He was arrested in 2009 on charges of aggravated assault with a deadly weapon in Fort Worth and in 2013 for theft, according to Tarrant County court records.

He was arrested in 2016 in New Jersey after police found him with 12-gauge shotgun and rounds wrapped in plastic in the area of an oil refinery, according to the Herald News Tribune in East Brunswick. It was not immediately clear how those charges were resolved.

In a 2009 affidavit requesting a court-appointed attorney, Kinnunen listed having a wife and said he was living with four children, according to court records. He told the court he was self-employed in landscaping and irrigation work.

Court records from Grady County, Oklahoma, obtained by Dallas television station KXAS, show that Kinnunen's ex-wife sought a protective order in 2012 in which Cindy Glasgow-Voegel described her husband as a "violent, paranoid person with a long line of assault and batteries with and without firearms. He is a religious fanatic, says he's battling a demon."

Church officials held a closed meeting and prayer vigil just for church members Monday evening. Farmer told the crowd that he had encountered Kinnunen in the past.

"I had seen him. I had visited with him. I had given him food," Farmer said.

White Settlement's website says it was named by local Native Americans in the 1800s for white families then settling in the area. City leaders who worried that the name detracted from the city's image proposed renaming it in 2005, but voters overwhelmingly rejected the idea.

Wilson said the church started the security team about 18 months ago after moving to a new building and becoming concerned about crime in the area. Wilson has been a firearms instructor since 1995, spent six years in the Army National Guard and was a Hood County reserve deputy. He said some of the security team members he trained were at first afraid to touch a gun.

"I don't feel like I killed a human, I killed an evil," Wilson said. "That's how I'm coping with the situation."