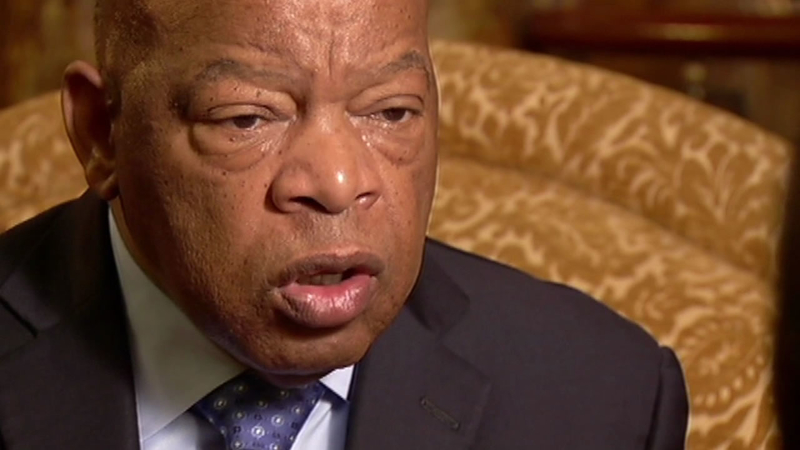 SAN FRANCISCO (KGO) -- During Black History Month, one of the living legends of the civil rights movement is in the Bay Area.

Atlanta congressman John Lewis is reaching out to young people to promote the philosophy of non-violent protest using a medium that's familiar to many of them, comic books.

Lewis had a front row seat during one of the most turbulent times in American history. The civil rights movement of the 60s.

"I feel I have an obligation to do what I can to tell the story because I was a witness," Lewis said.

What you have only read about, he lived as a young college student organizing non-violent protests against segregation.

"You'd be sitting in an orderly, peaceful fashion and someone would come up and spit on us or put out a lighted cigarette on your hair or on our backs," Lewis said. "It happened."

Lewis led the 1965 march that's shown in the movie "Selma." Lewis is the only one of the so-called Big Six, the organizers, still alive who marched on Washington.

The 75-year-old congressman was just a teenager when he became inspired by Dr. Martin Luther King after reading a comic book about the Montgomery bus boycott.

Lewis decided to use the same medium to share his experiences, hoping to show today's protesters the power of non-violence.

Civil Rights leader John Lewis is writing a trilogy of comic books documenting his experiences during the Civil Rights movement.

"Many, many years ago when I was on the Freedom Rides, a member of the Ku Klux Klan beat me and my seat mate leaving us bloody and unconscious," he said. "Years later that man and his son came to my Washington office and said, 'Will you forgive me.'"

Lewis' trilogy is called "March," the second in the series was just published. He is on a tour with co-author Andrew Aydin.

"When you combine something as powerful as John Lewis' story with a medium as powerful as graphic novels, it only makes sense young people would gravitate toward it," Aydin said.

"We can create a different America, a better America and in doing so, a better world," Lewis said.