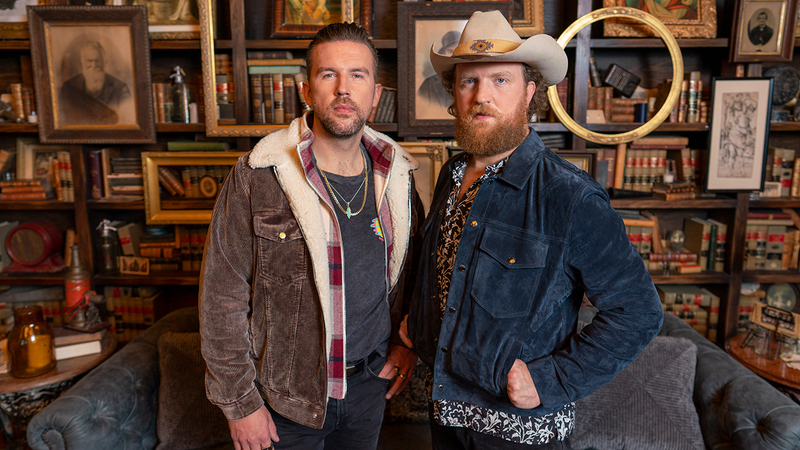 NASHVILLE, Tenn. -- When the Brothers Osborne take the stage at the CMA Awards on Wednesday, the award-winning duo will have a powerful message for fans who sometimes feel like outsiders - an experience that they know all too well.

The brothers from Deale, Maryland, opened up in recent months about their private lives and personal struggles, with lead singer TJ coming out publicly as gay and guitarist John talking about his anxiety.

The song they will play, "Younger Me," is a poignant reminder that it does get better. They are proof of that.

"The fact that we get to play a song that is so meaningful, particularly to myself, at a country music award show, it's one of those things that just kind of transcends the awards itself, money itself, fame," said TJ Osborne.

The four-time CMA award-winning duo are up for three awards, including album of the year for "Skeletons," the first time they've been nominated in that category.

Even recording their album felt like a series of hurdles to overcome. They had to initially delay recording while John Osborne took time off for therapy to deal his depression and anxiety that had gotten so bad he was seriously reconsidering his musical career.

"I had to go away. I had to turn my phone off. I had to be away from family," said John Osborne. "I had to restart."

One thing he learned, and kept learning later when COVID-19 hit, was the world wasn't going to end if he hit the pause button.

When they resumed recording, TJ was waylaid by salmonella poisoning, then a tornado struck Nashville in March of 2020, knocking out power to the East Nashville neighborhood where they were recording.

MORE: On The Red Carpet is counting down to the 55th CMA Awards on ABC
EMBED More News Videos

On The Red Carpet is previewing the 55th Annual CMA Awards from Nashville.

By the time they went back to finish the album, the coronavirus pandemic and shutdowns had begun.

"So there was an element to recording 'Skeletons' that it felt like it was the end of times, you know," said John Osborne. "I was like, this might actually be the last record we ever do in our life, and let's record it as if it is. And it still feels like that to me. We threw all of our chips on the table."

While TJ Osborne was open about his sexuality with his close friends and family, doubts kept him from deciding on when to publicly announce it. Other country artists waited years to publicly come out, such as Chely Wright and later on Ty Herndon, citing concerns about the effect it might have on their careers.

While there are many other openly gay artists and songwriters currently working in country music, including Brandi Carlile, Brandy Clark, Brooke Eden, Shane McAnally and Lily Rose, Osborne is one of the most prominent.

"Country music is a beautiful genre," said John Osborne. "But there has been this kind of undercurrent of... there's a vault and only certain people are allowed in. However, when you go to shows, you see people of all walks of life enjoying it."

When a state lawmaker blocked a proposed state resolution to honor TJ Osborne earlier this year, they met with Republican state Rep. Jeremy Faison over lunch to talk.

Luke Bryan has signed on to host the 55th CMA Awards, the Country Music Association and ABC announced Monday morning.

"It kind of gave the message that maybe people that are gay or LGBTQ really, truly still aren't that accepted in this state," TJ Osborne said. "And while that may be true in certain areas of our state, I don't feel like it is in Nashville, and I think it is a very accepting city here."

After the resolution was blocked, Brothers Osborne released their music video for "Younger Me" using the steps of the state capitol building as the backdrop.

The black-and-white video, which is nominated for music video of the year at the CMAs, features the band and several young people singing along to the lyrics.

The Brothers Osborne wanted others to see a different message coming from the capitol building - one of inclusivity and acceptance.

"There still is this other big movement here of people... who are accepting and will speak up and will be there for you with open arms," TJ Osborne said. "And you're not alone."