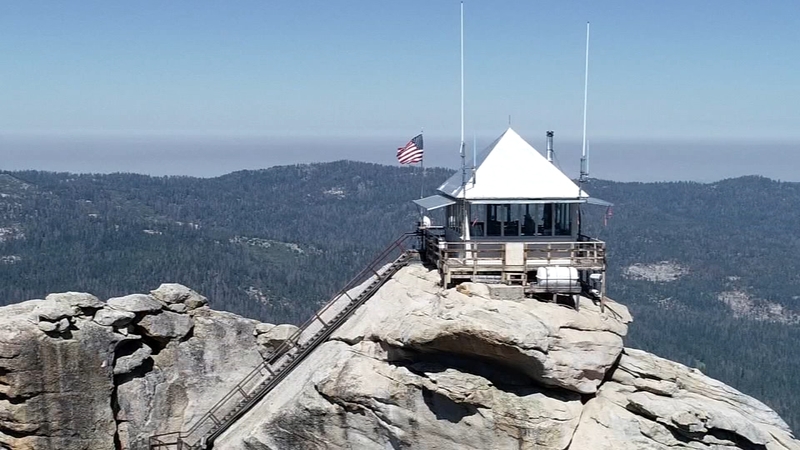 A trip to the historic Buck Rock Fire Lookout offers you and your family a view of the Sierra like no other.

The rock rises above the forest floor, taller and millions of years older than the giant sequoias it protects.

The top of Buck Rock stands at more than 8,500 feet, and the views from the gigantic slab of granite are "breathtaking" says Melissa Littlefield of Turlock.

She says, "You get up here, and it's like you're on top of the world. It's incredible!"


Marianne Emmendorfer with the Sequoia National Forest says "When there is a lightning strike, or people being careless with fire, we can see that smoke pop up quite quickly."

Buck Rock became a fire observation point in 1912 with "smoke-chasers" scurrying up and down the jagged granite to locate and report wildfires.

Kathy Allison of the non-profit Buck Rock Foundation says "We found that the builder, Ray Bradford, and the Forest Service, actually hoisted all of the timber and lumber and the materials up there. So, they cable-hoisted it up, and they just built it right on the rock."

Completed in 1923, the cab is one of the few and oldest of its kind, and it remains a working lookout, that you can visit.

However, making the journey up to the summit is half the fun.

The adventure starts driving along the tall trees of the General's Highway in Kings Canyon National Park and turns to the bumpy and rocky forest service roads.

You definitely want a 4-wheel drive or at least a high profile vehicle if you're coming up this way, especially the last two and a half miles up to the lookout.

You should stop at the landings to catch your breath, and admire the amazing scenery that most people only see from an airplane.

Once you reach the top, you realize every step was worth it.

A 360-degree view, from the coast and the valley to the great western divide.

When you're this high up, it feels like you could just touch the clouds.

Marianne Emmendorfer says when there's a fog layer, it looks like you could just walk out on those clouds.

She spends five days a week as a fire spotter: working, eating, and sleeping on the mountain in basically a glass house.

Mich keeps an eye out for smoke using the same "fire finder" that's been in the lookout for more than 80 years.

Mich says she uses the device every day even when she's not spotting smoke; she uses it to determine the location of a landmark when she's trying to learn the territory.

Volunteers like Tom Goodin take over the lookout on Mich's days off.

Tom says, "You know, there's a lot of people that pay a lot of money for these kinds of views and I get to do it for free!"

A non-profit foundation supplies the volunteers, the maintenance, and money to keep the historic lookout operating during fire season and accessible to visitors.

Buck Rock Foundation president Kathy Allison spent 16 fire seasons working in the lookout, and she still remembers the day when a severe thunderstorm rolled across the mountain.

Kathy Allison says, "I was clocking winds up to 70 mph, and I literally felt the lookout lifting!"

Your experience at buck rock should not be that hair-raising, but if you get a thrill walking up all those stairs, climbing up the rock itself, or savoring the magnificent site of the Sierra, then this "high adventure" is for you.

Kathy Allison says, "I think that being in a place like this connects you to nature, to the land, and I think that's an important thing to do in this day and age."