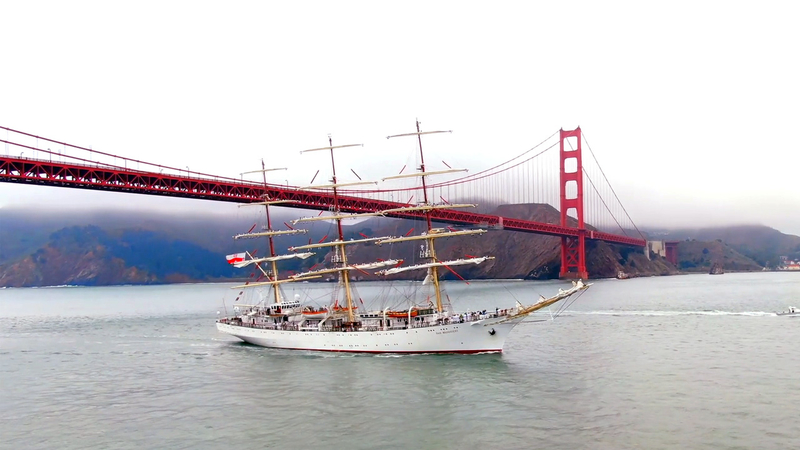 SAN FRANCISCO (KGO) -- A special ship that's on an around-the world tour made a port of call in San Francisco on Wednesday morning.

The Polish tall ship, named Dar Mlodziezy which means gift of youth, left Poland in the spring and has been stopping off in various countries as part of a goodwill tour.

About 150 young cadets from maritime schools in Poland are manning the ship, as well as high school students who won a nationwide essay contest to take part in the voyage.

The ship is traveling across the globe to celebrate the 100th anniversary of Poland regaining its independence after World War I. The vessel was made in 1982 from coins donated by youth in Poland.

"There's a renaissance in Poland the last five or ten years and these young people represent the future of what Poland is, a very modern, dynamic, multicultural country," said Christopher Kerosky, Polish Honorary Consul in San Francisco.

The Bay Area stop made for an emotional reunion for the Didich family, who flew from Poland to meet up with their daughter, who they had not seen for seven months.

"It was very emotional. I tried not to cry when we stood here for the ceremony, but I actually cried," said Maria Didich, who loves sailing and always dreamed of traveling around the world.

She is three months away from accomplishing that. The Dar Mlodziezy leaves San Francisco on Saturday morning. The public can visit the ship at Pier 17, next to the Exploratorium, on Thursday from 12 p.m. to 6 p.m., and on Friday from 4:30 p.m. to 6 p.m.

It will then travel to Los Angeles, Acapulco and Panama for a World Youth Day, which was started by Pope John Paul II, a native of Poland. The ship will go through the canal and then head to the eastern United States before heading to London and then back to Poland.
Report a correction or typo
Related topics:
community & eventssan franciscotall shipsgolden gate bridgesailing
Copyright © 2021 KGO-TV. All Rights Reserved.
More Videos
From CNN Newsource affiliates
TOP STORIES