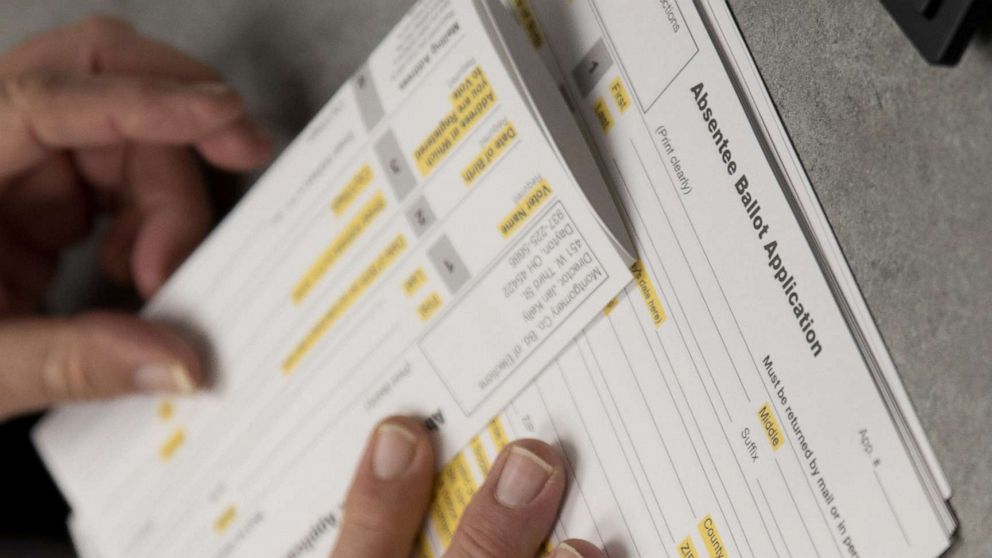 As part of the sweeping emergency funding package, congressional leaders settled on including hundreds of millions to boost states' efforts to oversee elections, but some voting rights advocates argue the sum won't be enough in the face of an intensifying coronavirus outbreak.

The $340 billion emergency supplemental funding in the unprecedented $2 trillion federal stimulus bill, which was unveiled on Wednesday and is aimed at broadly reducing the economic impacts of the coronavirus on businesses, workers and the health care system, includes $400 million in election assistance.

Late Wednesday the Senate approved the legislation, sending it to the House for approval.

Amid a scrambled primary calendar, with at least 12 states and one territory already postponing their nominating contests, states are rushing to expand vote by mail efforts. The funding provided by Congress is poised to buoy states seeking to increase their capacity to run an election by mail, expand early voting and online registration, and increase safety measures at in-person polling sites amid the crisis.

Under current constraints, states are set to face a surge of voters casting absentee ballots as voters and poll workers remain concerned over the spread of the disease at polling locations, which are often inside schools, libraries, churches and other gathering sites that have been shuttered due to the coronavirus.

While the figure will help states to beef up their preparations for upcoming primary contests and safeguard individuals from the risks of the pandemic, it represents only a fraction of the $4 billion House Speaker Nancy Pelosi sought in congressional Democrats' bill introduced on the House side.

It is also significantly less than the $2 billion the Brennan Center for Justice at New York University Law School estimated it would cost for states to adequately prepare for an election amid the coronavirus crisis.

The multibillion dollar total assessed by the nonpartisan think tank is five times more than the amount currently granted by Congress. Experts at the Brennan Center insist more needs to be done to allow states to adequately prepare, staff and organize the voting process in time for the November election.

"Congress failed to include sufficient, urgently needed funds in the stimulus to help states run elections in a time of pandemic," Michael Waldman, president of the Brennan Center said in a statement released on the heels of the Senate announcing that they reached a deal.

"This could wreak havoc in November," Waldman warned.

An analysis by the Brennan Center outlines five core changes that needed to be implemented to ensure that the November election functions effectively in the new constrained environment. Chief among those suggestions is a universal vote by mail policy, which experts estimate would cost between $982 million and $1.4 billion in order to make the option available to all voters.

The cost assessment would cover "ballot printing, postage, additional facilities for processing and storing ballots, and other necessary expenditures."

Some Democratic lawmakers have been steadily sounding the alarm about the need to protect the electoral process amid the ongoing crisis. Sen. Ron Wyden, D-Ore., and Sen. Amy Klobuchar, D-Minn., along with 24 other Democratic senators, are the co-sponsors of the Natural Disaster and Emergency Ballot Act of 2020, which aims to ensure "the 2020 elections and future elections are resilient to emergencies, including natural disasters and pandemics."

Their chief proposal aims to protect the ability of "voters in all states [to] have 20 days of early in-person voting and no-excuse absentee vote-by-mail."

Shortly after the spending bill was released, Klobuchar and Wyden called the $400 million sum only "a step in the right direction" as it comes in at the lower end of Democrats' initial proposal for election aid.

"In times of crisis, the American people cannot be forced to choose between their health and exercising their right to vote," Klobuchar and Wyden said in a joint statement. "While this funding is a step in the right direction, we must enact election reforms across the country as well as secure more resources to guarantee safe and secure elections."

"We will continue to fight to pass the Natural Disaster and Emergency Ballot Act of 2020 to ensure every eligible American can safely and lawfully cast their ballot," they added.

Democrats across the board, and across the political spectrum, are echoing similar messages.

One progressive advocacy group, Stand Up America, which held a call with reporters earlier this week featuring both Klobuchar and Wyden, is one of the key drivers pushing voting by mail across the country, also urged that the total is "not enough."

"This pandemic is a threat not only to our health and our economy, but also to our democracy," said Sean Eldridge, founder and president of the non-profit. "While we're encouraged that our grassroots advocacy and pressure from Democratic lawmakers forced Republicans to increase funding for voting access from $140 million to $400 million, it's still not enough to ensure the integrity of the 2020 election."

"Congress must fully fund national vote-by-mail, online registration, and early voting in the next coronavirus response package so that states can ensure every eligible voter can cast their ballot this fall," Eldridge pressed.

Nevertheless, state leaders are forging ahead with implementing expanded vote by mail operations to continue with primary elections still to come.

In Wisconsin, which is currently set to be the next state up in the presidential nominating process, Democratic Gov. Tony Evers is still planning to move forward with their presidential primary on April 7, including in-person voting, as state election officials push for voters to use absentee voting to accommodate social distancing practices and reduce crowd size. As of Tuesday, municipal clerks received 554,116 absentee requests, compared to 249,503 in the Spring election in 2016.

In Wyoming, Alaska, and Hawaii, which were initially scheduled for April 4, the state parties overseeing the contests have all cancelled in-person voting, shifting entirely to vote by mail, and extended the date by which ballots must be returned by - essentially delaying their primaries.

The Acela Primary, which was originally slated to happen across six states on April 28, is now only down to one. New York is still set to vote on that day, while in Pennsylvania, lawmakers are currently pushing through a bill to officially postpone their primary until June 2 - a move that follows suit with Connecticut, Delaware, Maryland and Rhode Island.

The New York State Election Commissioners' Association, called on Gov. Cuomo to consider amending election law to allow for absentee voting during all times of a state of emergency due to a pandemic or infectious disease among other considerations.

"We are facing critical shortages of inspectors and polling places due to the ongoing public health crisis. Over the next week, BOEs will find it almost impossible to meet mission critical deadlines for testing machines and preparing ballots because of staff shortages due to the ongoing stay-at-home order," a release from the association reads.

In Georgia, Secretary of State Brad Raffensperger announced Tuesday that his office will be taking the drastic measure of mailing absentee ballot request forms to Georgia's 6.9 million voters for the May 19 primary.

This step is seen as a supplemental measure to minimize the number of voters who still choose to vote in-person.

"Times of turbulence and upheaval like the one we Georgians face require decisive action if the liberties we hold so dear are to be preserved," Raffensperger said in a statement. "I am acting today because the people of Georgia, from the earliest settlers to heroes like Rev. Dr. Martin Luther King, Jr. and Congressman John Lewis, have fought too long and too hard for their right to vote to have it curtailed."