Congress, White House on the brink of another government shutdown 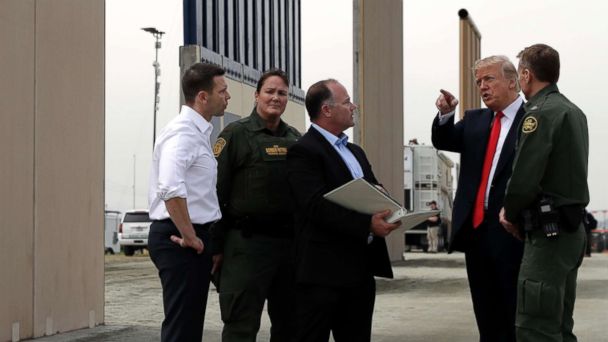 It all comes down to the wall.

Washington is on the brink of another government shutdown, with Democrats and Republicans sparring over funding President Donald Trump's signature (and unfulfilled) campaign promise, with government funding set to expire on Dec. 7 at midnight.

Trump wants $5 billion in funding to construct a wall on the U.S.-Mexico border as part of any agreement to sign a package of the remaining funding bills yet to be signed into law for the next fiscal year.

Republicans leading the House and Senate support Trump's aggressive push for funding. But they need Democrats to support the proposal in the Senate to pass the 60-vote threshold, complicating any funding negotiations.

Democrats have rejected a Republican proposal to extend the $5 billion in border funding over two years.

"No matter how many years you spread it over, $5 billion for President Trump's wasteful wall is too much money," Rep. Nita Lowey, D-New York, the top Democrat on the House Appropriations Committee. "House Democrats will continue to stand firm in opposition to the border wall boondoggle and, while we are willing to negotiate on how best to secure our border, we will never support wasting tax dollars on a wall designed to gin up the Republican base."

"It's just what we've done in previous years -- funding for fencing on the border where experts say it makes the most sense. It would protect our border far more effectively and far more quickly than any wall," Schumer said on the floor.

House Majority Whip Steve Scalise, R-Louisiana, predicted that Democrats would be blamed for any shutdown, though Trump has repeatedly threatened to shut down the government over wall funding.

"The president ought to have the tools he needs to protect the border, and if Chuck Schumer wants to shut the government down because he's not willing to secure America's border, I think in the end that's a failed strategy by him," he told ABC News.

A shutdown would be the second of the year, following a three-day partial government shutdown last January over the status of hundreds of thousands of young undocumented immigrants known as Dreamers.

Because Congress has already cleared five of the 12 annual spending bills, a shutdown would only impact certain government agencies and departments, including the departments of Commerce, Justice, Homeland Security, State and Agriculture.

If Congress can't agree on border security or wall funding, one solution being considered by lawmakers is a measure to fund the Department of Homeland Security at current levels through the fiscal year.

But it's unclear if that would satisfy the president, who could see the chances of a border wall fade when Democrats take over the House in January.
Report a correction or typo
Related topics:
abc newsnational
Copyright © 2021 ABC News Internet Ventures.
More Videos
From CNN Newsource affiliates
TOP STORIES