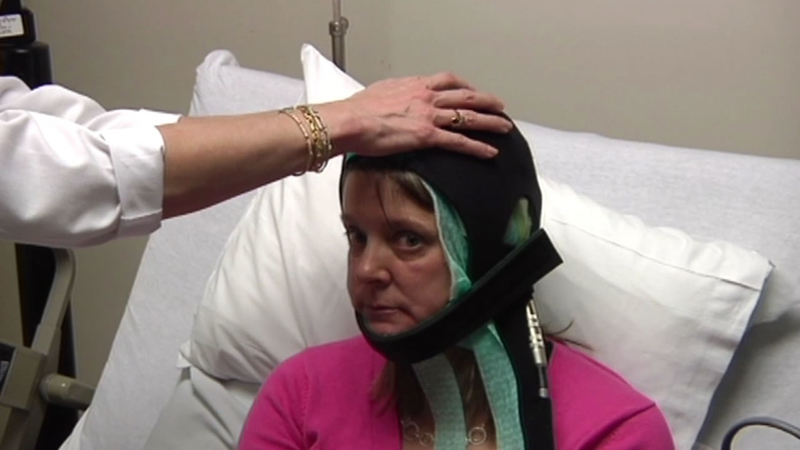 A technology tested in the Bay Area could soon be giving an emotional boost to women fighting cancer. It's a cap that allows cancer patients to keep their hair while undergoing chemotherapy.

Bay Area journalist Heather Millar, was using her heart to fight cancer, and her head to fight its side effects, chilling her scalp with a device known as the Dignicap, to keep from losing her hair during chemotherapy.

"It's not about the vanity, it's about explaining to everybody on the street that I have cancer," Millar said.

The cap works by slowly cooling the scalp to constrict small blood vessels and limit the concentration of cancer drugs reaching the hair follicles. It's been undergoing clinical trial at the University of California, San Francisco, and lead investigator Hope Rugo, MD, believes the benefits are more than cosmetic.

"The chance of keeping their hair makes them psychologically approach the chemotherapy with a much healthier attitude and more like they have control over something," Rugo said.

Still, there have been safety questions about the cap and similar devices made by other companies. Mainly that residual cancer cells might be left alive in the scalp, allowing the disease to return. Rugo said the concerns have not borne out.

"Turns out scalp metastasis are extraordinarily rare, it's a rare site for cancer to grow in. And if you look at all the patients who've had scalp cooling and followed over time, it doesn't appear there's any higher risk of having scalp metastasis," she says.

The UCSF team has now gathered enough data from the trial to present results to the Food and Drug Administration, If approved, Swedish manufacturer Dignitana plans to begin working with hospitals and chemotherapy centers across the country.

Cancer survivor Wendy Woods said she's come out of treatment with a more positive outlook, and at least one appointment to keep.

"I am going to get my hair cut," Woods said.

Heather Millar also made a full recovery and has been cancer free for three years. She says since appearing in an earlier ABC7 News report in the trial's early stages, she's become an advocate for the scalp cooling technology and believes approval would help more women face chemotherapy with courage and dignity.

"Even though cancer treatment is really horrible this is just one thing you cannot worry about," she said.

Rugo's team is now planning to present their trial data on the cap to the FDA at the end of this month.