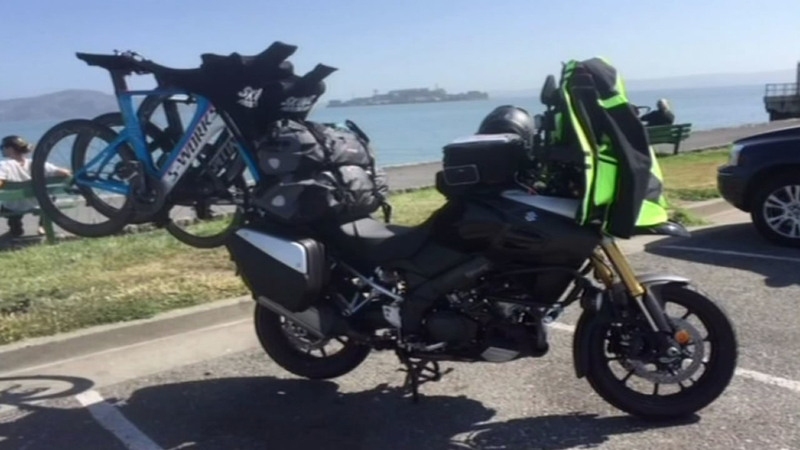 The bicycles he and his wife need for Sunday's Escape from Alcatraz triathlon have been stolen.

Chad Kimbrell and his wife woke up early Saturday morning to go on a practice swim for this weekend's triathlon.

Both their bikes were locked onto a rig on his motorcycle, which was parked right outside a hotel.

The couple drove 3,000 miles from South Carolina to San Francisco for the race.

Officials say someone cut a security cable and two pad locks that had been securing the bicycles to his motorcycle.

It all happened within a few feet from the security and valet booth at the hotel.

Kimbrell told ABC7 News he had no idea San Francisco had a such a problem with bike thefts otherwise he wouldn't have left them outside locked to his motorcycle.

"Early Thursday morning, I asked and 'oh we have no problems here, we'll park you right here,' the valet guys are there, the lobby, you can see where where we're at, no issues at all and I felt really comfortable with that," Kimbrell said.

"He was kind of defeated by it a little I think and I told him, I said, 'no we can't not do the race because we don't have bikes, we'll figure something out,"' Candace Ziph said.

The couple refitted their shoes ahead of the triathlon to fit bikes that someone will be lending them for the race.

During Saturday morning's check in, the triathlon announcer told all the athletes taking part in the race about what happened and someone has donated a bike for their race.