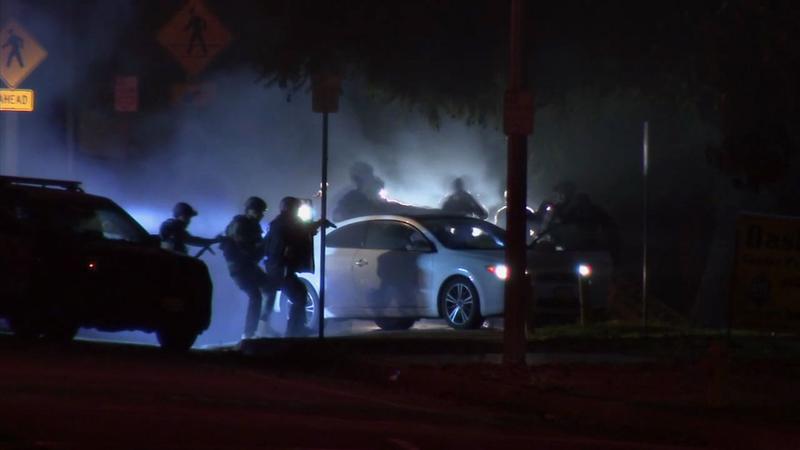 COVINA, Calif. -- A man died in an officer-involved shooting after he barricaded himself in a car with his 7-month-old daughter for hours at a Covina park Sunday.

The incident began around 2:45 p.m. at Kahler Russell Park on Glendora Avenue, between Colver Place and Wingate Street, when an officer noticed a car blocking the park entrance.

The officer approached the vehicle and noticed the suspect arguing with his girlfriend and then threatening her with a knife, authorities said. The woman at some point took the keys and got out of the vehicle.

The officer backed off, and that's when the suspect refused to get out of the car.

Covina police said the suspect was a 22-year-old resident who took his infant daughter hostage in the car. He made threats to hurt himself, but not the child, according to police.

Authorities were negotiating with the suspect in an attempt to get him to surrender peacefully and not harm himself. A friend, who said the man's name was Daniel, even tried to help with negotiations to get the baby to safety.

"I was talking to Daniel while he was on the phone in the car. I was speaking to him and he was telling me that he was a little scared of what's going on. The baby was in no danger whatsoever, and we all know that," Jessie said.

Police said it appeared Daniel was taking care of the infant during the hourslong standoff.

"I know it looks bad, but he's a good person and everything. I told the cops what he told me that if one of us, myself, my dad or my brother, go to the car, he would give us the kid and he'll come out," Jessie continued.

But authorities would not allow Jessie or anyone else to get near the car to try and get the child.

It was unclear if the suspect was under the influence of drugs or alcohol.

Around 10 p.m., SWAT officers used a flash-bang device to distract the suspect and get him out of the vehicle. He got out and authorities struggled to get the baby away from him.

Shots were fired and the suspect was hit. He quickly succumbed to his injuries and died at the scene. The baby was taken to safety.

A relative said that the argument stemmed from a custody dispute between Daniel and his girlfriend. They said Daniel did not want to lose custody of his child.