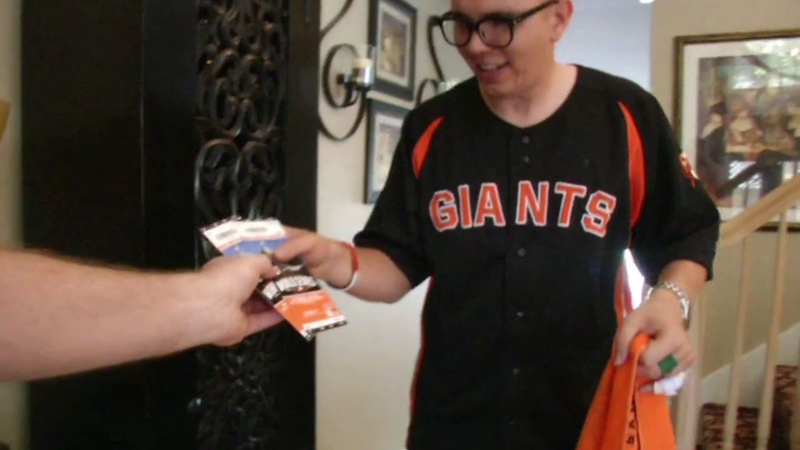 CUPERTINO (KGO) -- Giants fans from Cupertino took their patriotism to the next level. They're giving some orange and black to those who fought for the red, white and blue.

"When I was on patrol in my Humvee, I drove over a bomb," he said.

He suffered a brain injury, lost fingers and both of his legs. But he still had his spirit and his family and friends.

With years of hard work, and some high-tech prosthetics he's walking taller than ever before. He now stands 6 feet tall. He used to be 5 feet 11 inches tall. Those legs are about to carry him somewhere he never dreamed he'd go.

Along with Marine Corps veteran AJ Pasciutti from Sunnyvale, Jergens will get to watch the Giants play in Game Four of the World Series.

"Before my injury, I thought that maybe one day if I save up and work real hard, I'd go see a professional team."

The gift comes from Kevin and Grace Witt, who had tickets, but wound up with a scheduling conflict.

"My husband wasn't going to be able to go to the World Series, and this is a man that eats, lives and drinks (Giants)," Grace Witt said.

Kevin Witt has been to every Giants World Series since 1989. He could've sold these tickets for thousands of dollars. But he didn't.

"Our military personnel, you know, they're the ones that are keeping us safe," Kevin Witt said. "And they're defending our country so we can play this game."

Brian Jergens is actually from Kansas City, but his wife is a Giants fans.

"I made him watch several games and it grew on him and now he's the one who's telling me, the game's on, the game's on," Jennifer Jergens, Brian Jergen's wife said.

But the story doesn't end there. A friend heard about the Witt family's generosity and offered Kevin Witt a ticket for Friday night's game.

"I jumped on that in a heartbeat," Kevin Witt said.

Now, he gets to watch his team play and give a little to those who gave so much.