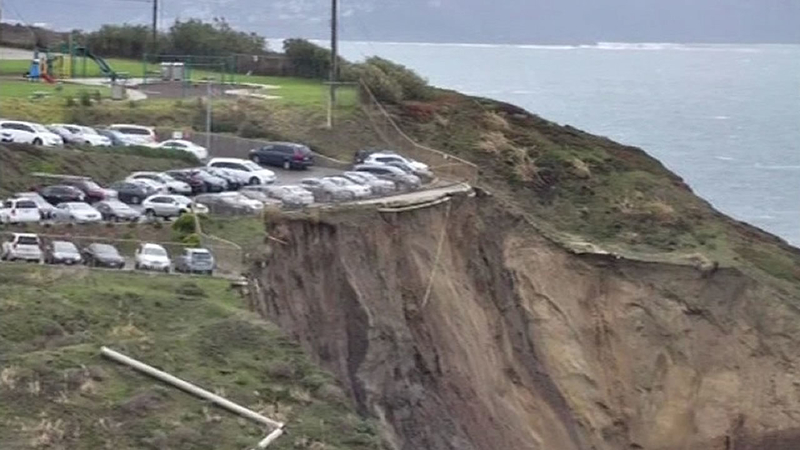 DALY CITY, Calif. (KGO) -- Recent rain has some Daly City residents worried about an ongoing landslide in Avalon Canyon. One man has been documenting the slide with photographs, but public works says it's not as bad as it looks.

A church is at the heart of the issue, not the building, but the parking lot. It winds down the hill and the slide has eaten away the land right up to the asphalt and in some spots, underneath it.

Public works director says the church is aware and it's up to them to keep people and cars out of harm's way.

Mike Miller lives on the opposite side of Avalon Canyon and has been taking pictures of this landslide since 2001.

"I'm just worried my front row seat is going to be to tragedy one day," Miller said.

He says things got worse when construction began on the new Korean Central Presbyterian Church in 2002. The actual church is on solid ground, but the parking lot is precarious.

"My only real concern is that I hope no one gets hurt when the hillside does eventually collapse because it's going to take away part of the parking lot and if that happens on a Sunday in the middle of church, then people are going to lose their cars, at the very least," Miller added.

Daly City's director of public works says it's true, the hillside will continue to slough off into the ocean, especially after a lot of rain because it makes the soil heavier.

"What residents see over the decades really are fairly substantial landslides that are actually small in comparison to the total area that will move eventually," Daly City's director of Public Works John Fuller said.

However, there is little Public Works can do. For now, it's up to the church to protect its property and parishioners.