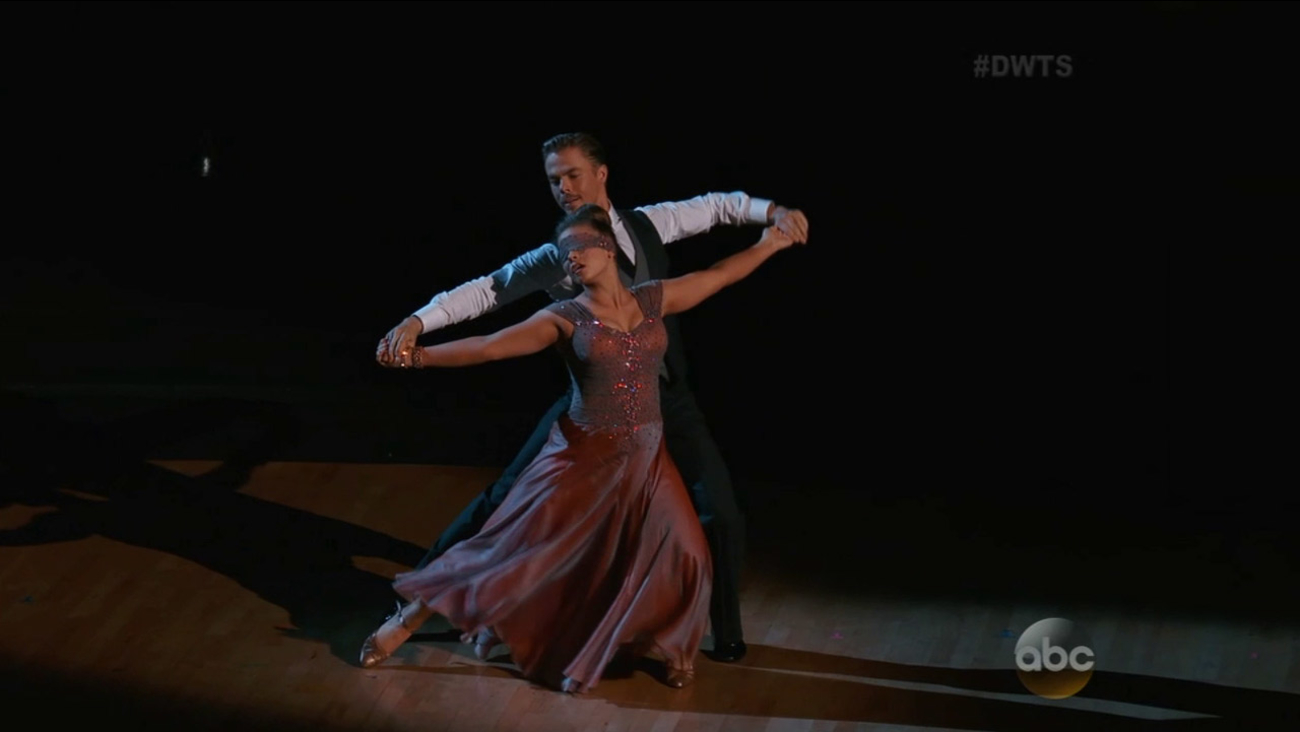 Bindi Irwin dances with her partner Derek Hough during week 9 of "Dancing With the Stars" on Monday, Nov. 9, 2015.

LOS ANGELES -- Six couples were scheduled to dance their hearts out for the chance to earn one of five spots in the "Dancing With the Stars" semi-finals.

Nine weeks of dancing has left the celebrities tired, bruised, and more. But tonight, Tamar Braxton was taken to the hospital after dress rehearsal and didn't make it back in time to perform her individual routine live. The five others did, and everyone was then paired with one other couple for an additional routine.

Would Tamar make it back in time to dance the "showstopper" duo? It was down to the wire, but yes, she made it and was able to be scored for one real performance.

Here's a rundown of round nine's scores, from highest to lowest:

BINDI IRWIN - 30 out of 30; 30 out of 30 for duo; 60 out of 60
Bindi and Derek have topped the leader board more than any other couple, and they know they are being scrutinized very, very closely. Derek has a little freak out during rehearsal because he's not feeling inspired for his choreography for the Viennese Waltz. He wants every little thing to be perfect for Bindi. She tries to be the cheerleader this week and tells him anything he puts into a routine will be special as far as she's concerned. The dance begins and ends with Bindi being blindfolded, and in between, they perform an elegant, fluid dance. After the standing ovation, Julianne Hough commented on Bindi's growing maturity, grace and risk-taking on the dance floor. Bruno Tonioli said the routine showcased what an accomplished dancer she's become, and Carrie Ann Inaba likes the feelings Bindi evokes when she dances, calling it "art" every time.

ALEXA PENAVEGA - 30 out of 30; 30 out of 30 for duo; 60 out of 60
It seems on this show when someone shares something very personal it always ends up as a fantastic, emotional routine. That happened to Alexa this week. She shared with Mark Ballas (and, of course, us since there are cameras everywhere) that when she was a young actor a producer told her she was too fat and that led to six years of bulimia. Mark took that pain and choreographed a Contemporary dance around it. Now, a bulimia-inspired dance may sound a little bizarre, but it was essentially about facing a demon and taking it down. The judges and the audience gave the duo a standing ovation. Bruno thought Alexa danced as a woman possessed and praised Mark's scarily brilliant choreography. Carrie Ann said it felt like more than a dance - it was healing and inspiring. Julianne talked about showing vulnerability but gaining strength.

NICK CARTER - 28 out of 30; 27 out of 30 for duo; 56 out of 60 total
Nick realizes he's been the little engine that could this season: slow and steady, but he feels like he's finally been able to wrap his head around the process. But just as he's conquering the mental game, his body starts giving out. A hip issue means less rehearsal for the Quickstep, lots of stretching, and even more worrying from Sharna. But none of the troubles show up for the performance, and Carrie Ann was happy to see he hadn't lost his "mojo." Julianne told Nick he's better out of hold than in hold with Sharna, so that's something to work on, and Bruno didn't see anything wrong and thought it was a slick, sharp dancing match made in heaven.

CARLOS PENAVEGA - 27 out of 30; 24 out of 30 for duo; 51 out of 60 total
Carlos was in jeopardy last week (which we veteran DWTS watchers know means absolutely nothing) but it still feels like a monkey on his back. He admits he'd have been very bummed if he were sent home. He and Witney have been assigned the Argentine Tango and, like Derek, Witney had a bit of a "dancer's block" when it came to getting the routine together. All three judges liked the dance and its content, but Julianne and Carrie Ann thought it lacked a little passion and impact. Bruno didn't see that as a problem, but he had an issue with Carlos' sometimes floppy feet.

ALEK SKARLATOS- 24 out of 30; 24 out of 30 for duo; 48 out of 60 total
The hero has his work cut out for him. Even his pro partner, Lindsay, tells him the hard truth that he's not the best dancer on the show. But...he's also one of the hardest workers and she knows he'll try his best. They have the Salsa for their individual routine, and Alek is not one to really shake those hips and bring his sexy back. He is also reticent to take off his shirt so the compromise is an open jacket that kind of, sort of shows off his chest. And it's a newly waxed chest. How do I know this? Because they showed us the waxing procedure (think Steve Carell in "The 40 Year Old Virgin.") Julianne said the wax paid off because he looked great, but the bad news was he messed up the routine. Bruno thought his character looked like a playboy out of "Miami Vice" (and then Tom Bergeron reminded him that Alek isn't old enough to understand the reference). Carrie Ann liked part of the dance, but felt it didn't completely come together.

TAMAR BRAXTON - 22 out of 30; 27 out of 30 for duo; 49 out of 60 total
Tom had to consult that massive missive known as the DWTS rulebook when Tamar wasn't back from the hospital in time to perform her Contemporary routine live. The judges watched a taped version of dress rehearsal and that's what they had to base their scores on, which is never an ideal situation. Bruno reminds us he can't judge on what could have been, and the rehearsal had many mistakes. Carrie Ann called it a wicked shame (their song was "Wicked Game"), and Julianne said the dance definitely looked like a dress rehearsal.

DUO DANCES
Alek is paired with Carlos and they will perform a Paso Doble inspired by the musical "We Will Rock You." One added twist in this round is the celebs have to dance 30 seconds together with no partners. Alek and Carlos are clearly buddies and get to "bull" it up during the Paso, but apparently not enough. The judges wanted a little more fire.

Bindi and Alexa had to get "Fosse-ized" for their dual Charleston. They watch members of the Broadway cast of "Chicago" for their inspiration. One fun element is best buds Derek and Mark get to work together. Mr. Ballas lets us in on one of his nicknames for Mr. Hough... "KTVD." That stands for "killing the vibe, Derek." But only in rehearsal. They achieve perfection for the live performance, with Bruno saying "the Fosse posse rules!"

Finally we have the last pairing: Nick and Tamar. Will she make it back from the hospital in time? Yes, just barely! We see her being whisked into wardrobe and onto the stage. And in the true spirit of Hollywood's "show must go on" mentality, they all nail the routine. Tamar looks like she's about to pass out when it's over, but she gets through it. The judges all called her courageous and said the routine spoke volumes about love.

SPOILER ALERT:
Who's safe? Well that would be Bindi, Nick, Alek and Tamar.

That pits the married PenaVegas against each other for elimination. The tears begin to flow the second they both realized they will not be making it to the semi-finals as a couple. And in the end it's Alexa who is sent home. She stayed as classy as she's been all season, saying she's glad she could go out on such a high note.
Related topics:
arts & entertainmenttelevisiondanceabcdancing with the starsreality televisionballroom dancing
DANCING WITH THE STARS
'Dancing with the Stars' tangoing over to Disney+ next season
Julianne Hough talks about combining dancing with movie magic
'DWTS' pro Maksim Chmerkovskiy planning return to Ukraine
'Dancing with the Stars' pro back in LA after fleeing Ukraine
TOP STORIES
LIVE: SJ Sharks announce new GM
Highland Park parade mass shooting was planned for weeks; 6 dead
Highland Park 4th of July parade shooting survivors speak out
Amador Co. wildfire prompts evacuations, burns nearly 1,000 acres
'Fog fireworks' light up San Francisco sky
What we know about the victims of the July 4th parade shooting
3 critically injured after car crash sends vehicle into SF bus stop
Show More
2 police officers shot during July 4th festivities in Philadelphia
Man dies after being injured by illegal firework in SoCal
Experts call for new COVID vaccine, set expectations for efficacy
Feelings of gratitude, anger this Fourth of July
Joey Chestnut, Miki Sudo win Nathan's Hot Dog Eating Contest
More TOP STORIES News