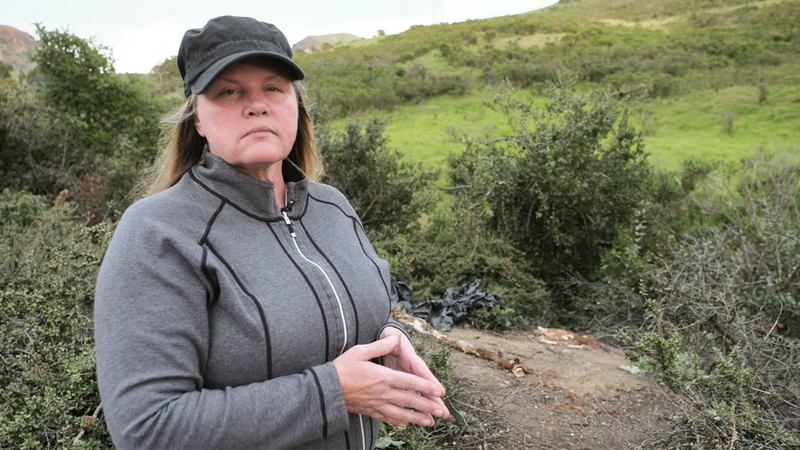 VALLEJO, Calif. (KGO) -- On Columbus Parkway in Vallejo, the cars and people have been passing by for months -- but it was CC Peters and her dogs that made the sad and disturbing discovery in the bushes last February.

If you love dogs, what CC Peters of Vallejo found along Columbus Parkway will disgust and concern you. #abc7now pic.twitter.com/Vi0guBnOop

"Absolutely a murder scene," she said. "A homicide of different dogs."

A dozen of them, by her best count -- dumped in plastic bags and left to decompose. The remains have been intentionally blurred out in the video above because they would be too disturbing.

"We found bags filled with all types of breeds, sizes, colors, dogs that were dead," Peters told ABC7 News.

And next to them, what appear to be the tools that someone used to kill them.

She made the discovery Feb 17th— reported to police and animal control. No clues. Now she has gone public.#abc7now pic.twitter.com/AenZiKjuWa

"The cutting edge of the metal tree cutter still had remnants of red blood and furs," said Marie Chua.

Chua, along with Cindy Shay run the Center for Animal Rescue in Solano County and got involved after reading social media warnings from Shay to local dog owners.

This was long after she made the find and called Vallejo police.

She went on to say police said this wasn't a murder.

Animal Control, meantime, found nothing to identify the dogs -- no collars, no microchips. But they appeared to have been well-groomed and well-fed -- a yorkie, a lab, a poodle -- clearly pets.

"Something is definitely wrong with any soul that could do this," Shay told ABC7 News.

"Something wrong -- there's lots of missing dogs in the neighborhoods. People blame coyotes, well I think something else is going on," Peters said.

Vallejo police did not return our calls Wednesday night.

She found the carcasses of 12 pets, dumped in plastic bags. No identifications. pic.twitter.com/E8vXx56Exk

And she found the weapons used to kill them, left at the scene. #abc7now pic.twitter.com/zjxzhfOsyg

If you love dogs, what CC Peters of Vallejo found along Columbus Parkway will disgust and concern you. #abc7now pic.twitter.com/Vi0guBnOop