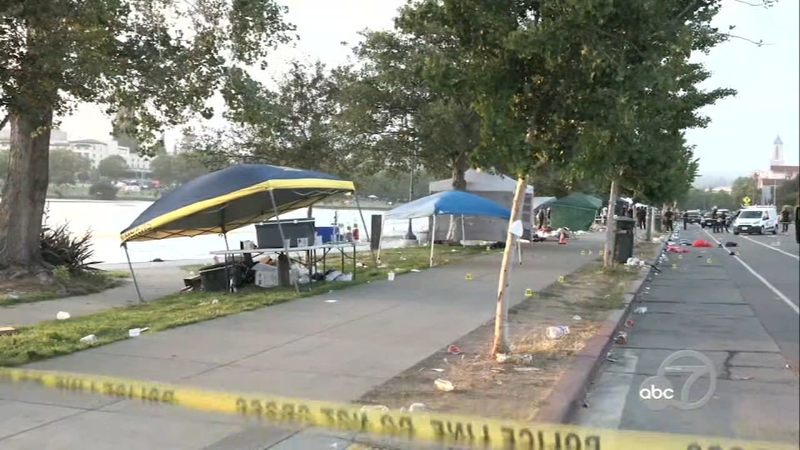 OAKLAND, Calif. (KGO) -- Oakland police say the deadly weekend shooting at Lake Merritt that killed a man and wounded seven others was not random and is tied to San Francisco gangs.

According to Oakland Police Chief LeRonne Armstrong, there were several shooters and firearms at the 2200 block of Lakeshore Avenue. An estimated 5,000 people were present and multiple shots were fired.

The shooting happened just after 6 p.m., where approximately 10,000 people had gathered for a Juneteenth celebration on the other side of the lake.

The seven victims injured in the shooting range in the ages of 16 to mid 60s.

A 22-year-old man from San Francisco was pronounced dead at the hospital. The other victims are reported to be in stable condition.

Oakland police arrested two suspects who were seen running from the scene with firearms. Their two firearms were also seized. However, after an investigation, police determined the two men arrested were not responsible for the shooting.

"Tonight a joyous occasion at our Lake Merritt was marred by a senseless act of gun violence. Police in the area tended to victims, and apprehended two people with firearms near the scene. The investigation is ongoing and will determine if they are connected to the shooting. Our thoughts are with the family and friends of the victims, and I want to thank our officers for a quick response."

Police are encouraging anyone with information, video footage or photos to contact OPD's Homicide Division at (510) 238-3821.

Crime Stoppers of Oakland and the Oakland Police Department are offering up to $40,000 for information leading to the arrest(s) in this case.

OPD Chief Armstrong announces at a press conference 8 victims, of which 1 deceased. OPD is looking for multiple shooters. This shooting appears to be gang related. If you have any information please call OPD’s Homicide Division at (510) 238-3821. pic.twitter.com/yjPC3CjC8f

As Council reps of Lake Merritt, @carroll_fife & I send condolences to the family who lost a loved one. We seek love & healing for those injured & who experienced this terrible trauma.