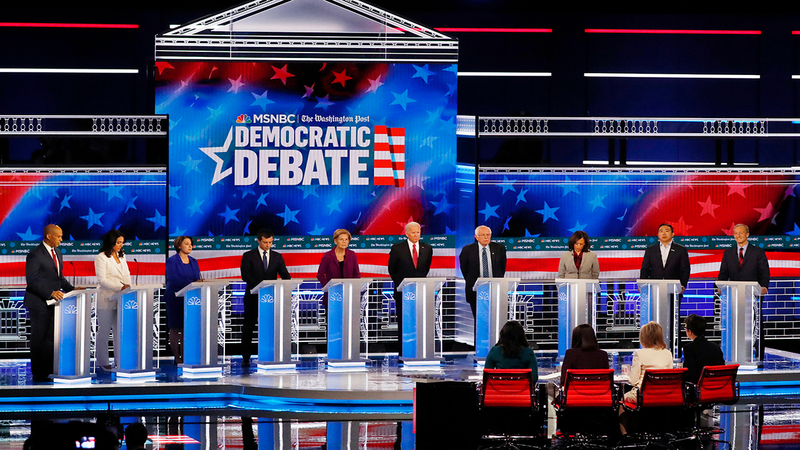 Democratic debate revives clashes over 'Medicare for All'

ATLANTA -- Democrats spent more time making the case for their ability to beat President Donald Trump than trying to defeat each other in their fifth debate Wednesday night.

Civil in tone, mostly cautious in approach, the forum did little to reorder the field and may have given encouragement to two new entrants into the race, Mike Bloomberg and Deval Patrick.

Here are some key takeaways.

The impeachment inquiry of President Donald Trump took up much of the oxygen early in the debate.

The questions about impeachment did little to create much separation in a field that universally condemns the president.

The candidates tried mightily to pivot to their agenda. Massachusetts Sen. Elizabeth Warren talked about how a major Trump donor became the ambassador at the heart of the Ukraine scandal, and reiterated her vow to not reward ambassadorships to donors. Former Vice President Joe Biden tried to tout the investigation as a measure of how much Trump fears his candidacy.

Impeachment is potentially perilous to the Democratic candidates for two reasons. A Senate trial may trap a good chunk of the field in Washington just as early states vote in February. It also highlights a challenge for Democrats since Trump entered the presidential race in 2015 - shifting the conversation from Trump's serial controversies to their own agenda.

Vermont Sen. Bernie Sanders warned, "We cannot simply be consumed by Donald Trump, because if you are you're going to lose the election."

Perhaps more than in any debate so far, Democrats explicitly acknowledged the importance of black and other minority voters.

California Sen. Kamala Harris said repeatedly that Democrats must reassemble "the Obama coalition" to defeat Trump. Harris, one of three black candidates running for the nomination, highlighted black women especially, arguing that her experiences make her an ideal nominee.

Another black candidate, New Jersey Sen. Cory Booker, added: "I've had a lot of experience with black voters. ... I've been one since I was 18."

Neither Booker nor Harris, though, has been able to parlay life experiences into strong support in the primary, in no small part because of Biden's strong standing in the black community.

Biden's standing is also a barrier to other white candidates, including South Bend, Indiana, Mayor Pete Buttigieg, who is surging in overwhelmingly white Iowa but struggling badly with black voters in Southern states like South Carolina that have proven critical to previous Democratic nominees.

Buttigieg acknowledged as much, saying he welcomes "the challenge of connecting with black voters in America who don't yet know me."

The exchanges show that candidates seemingly accept the proposition that the eventual nominee will have to put together a racially diverse coalition to win, and that those whose bases remain overwhelmingly white (or just too small altogether) aren't likely to be the nominee.

The climate crisis, which Democratic voters cite as a top concern, finally gained at least some attention.

There were flashes of the debate Wednesday night, as billionaire environmental activist Tom Steyer swiped at Biden by suggesting the former vice president wants an inadequate, piecemeal approach to the crisis. Biden hit right back, reminding Steyer that he sponsored climate legislation as a senator in the 1980s while Steyer built his fortune in part on investments in coal.

Buttigieg turned a question about the effects of Trump's policies on farmers into a call for the U.S. agriculture sector to become a key piece of an emissions-free economy.

But those details seem less important than the overall exchange - or lack thereof. Perhaps it's the complexities of the policies involved. Or perhaps it's just the politics. Whatever the case, the remaining field simply doesn't seem comfortable or willing to push climate policy to the forefront, and debate moderators don't either.

Before every debate, Democratic presidential campaigns aides lay out nuanced, focused arguments their candidates surely will make on the stage. And every debate seems to evolve quickly into an argument over health care.

So it was again. Within minutes of the start, Warren found herself on the defensive as she explained she still supports a single-payer government run insurance system - "Medicare for All" - despite her recent modified proposal to get there in phases. Not to be outdone, Sanders reminded people that he's the original Senate sponsor of the "Medicare for All" bill that animates progressives. "I wrote the damn bill," he quipped. Again.

Biden jumped in to remind his more liberal rivals that their ideas would not pass in Congress. The former vice president touted his commitment to adding a government insurance plan to existing Affordable Care Act exchanges that now sell private insurance policies.

The debate highlights a fundamental tension for candidates: Democratic voters identify health care as their top domestic policy concern, but they also tell pollsters their top political priority in the primary campaign is finding a nominee who can defeat Trump.

The top contenders did nothing to settle the argument Wednesday, instead offering evidence that the ideological tug-of-war will remain until someone wins enough delegates to claim the nomination.

The debate was so genial that some of the most memorable moments were the candidates' well-rehearsed jokes.

Asked what he'd say to Russian President Vladimir Putin if he's elected to the White House, technology entrepreneur Andrew Yang said his first words would be, "Sorry I beat your guy."

Minnesota Sen. Amy Klobuchar drew laughs for an often-repeated anecdote about how she set a record by raising $17,000 from ex-boyfriends during her first campaign. She also pushed back at fears of a female candidacy by saying, "If you think a woman can't beat Donald Trump, Nancy Pelosi does it every day."

Booker, criticizing Biden for not agreeing to legalize marijuana, said, "I thought you might have been high when you said it."

And Harris may have issued the zinger of the night at the president when discussing his nuclear negotiations with North Korea: "Donald Trump got punked."

Hawaii Rep. Tulsi Gabbard has carved out a distinctive role during the Democratic debates - reliable gadfly.

On Wednesday she kept sniping at her own party, standing by her comments last month that its last presidential nominee, Hillary Clinton, is the "personification of the rot that has sickened the Democratic Party for so long."

Asked to elaborate, Gabbard said Democrats are "no longer the party that is of, by and for the people, it is a party that continues to be influenced by the foreign policy establishment in Washington, by the military-industrial complex."

Gabbard's fondness for slamming Democrats has led some in the party to fear she's laying the groundwork for a third-party run, something the congresswoman denies. Her criticism Wednesday drew a sharp riposte from Harris, who said Gabbard had been on Fox News "full-time" during President Barack Obama's administration and noting she met with Trump after the president's election.

Gabbard dismissively replied that Harris' response "only makes me guess that she as president will continue the status quo." She later tangled with Buttigieg, contending he had supported sending U.S. troops to Mexico, a charge that reduced him to disbelieving chuckles.

Gabbard made the stage due to the burst of attention she got after getting into her fight with Clinton. Wednesday's exchange showed how she can easily stay before the cameras while criticizing her own party.