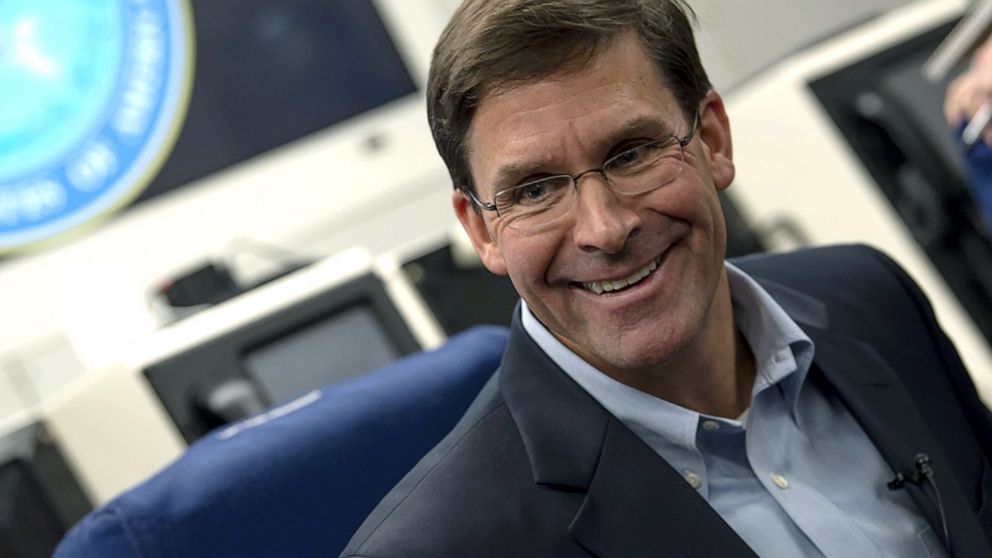 ABCNews
By ELIZABETH MCLAUGHLIN
A day after his formal nomination, Mark Esper, President Donald Trump's nominee to be the next secretary of defense, faced questions from senators at his confirmation hearing.

While there appeared to be near-unanimous consent among the senators that Esper would be confirmed to the position, Sen. Elizabeth Warren, D-Mass., voiced her opposition to the nominee due to ethics concerns, even accusing Esper of "corruption."

Esper, who's served as Trump's Army secretary, became acting Defense secretary on June 24 after his acting predecessor, Patrick Shanahan, withdrew his name from nomination following reports of domestic violence in his family's past. Esper appeared before the Senate Armed Services Committee for nearly three hours on Tuesday morning, more than 200 days after former Defense Secretary James Mattis resigned over policy differences with the president.

The hearing was largely not contentious, with Esper taking a hard line on China, pledging to prioritize the well-being of service members and their families, and emphasizing the importance of modernization, especially in regards to artificial intelligence and directed energy and hypersonic weapons.

Warren, also a presidential candidate, was among several senators who asked Esper about his seven years as chief lobbyist for the defense company Raytheon and how that employment could present a conflict of interest, if confirmed as defense secretary.

In a heated exchange with Warren, Esper acknowledged that, if confirmed, he would not extend his recusal from Raytheon-related matters or commit not to work for or get paid by a defense contractor for four years after he leaves government.

He said that this decision was made at the advice of Department of Defense ethics officials because the screening process he has in place -- which dictates how staff handle any issues that could present a conflict of interest -- is sufficient. He added that he would continue to abide by DOD rules and regulations.

"The American people deserve to know that you're making decisions in our country's best security interests, not in your own financial interests," Warren said. "You can't make those commitments to this committee, that means you should not be confirmed as secretary of defense."

Esper defended himself, talking about attending West Point and military service in which he embraced the motto "duty, honor and country."

"I went to war for this country. I served overseas for this country," he said. "I think the presumption is that anyone who comes from business or the corporate world is corrupt."

Several Republican senators later apologized to Esper for the confrontation. Sen. Rick Scott of Florida said that Warren "just needed a moment for her presidential campaign."

Defense officials and congressional leaders alike have expressed hope that a Defense secretary be confirmed before the August recess. Eric Chewning, chief of staff to the acting Defense secretary, has said the Senate can take as long as it needs to consider Esper's nomination, but added that "historical precedent" shows past defense secretaries have been confirmed in under a week.

Chairman James Inhofe, R-Okla., told reporters on Tuesday afternoon that the plan is to vote Esper's nomination out of committee on Thursday, with a final Senate vote next week.

During the confirmation process, Esper cannot serve in his acting role, so Navy Secretary Richard Spencer assumed the duties of acting Defense secretary on Monday afternoon when the White House submitted Esper's formal nomination to the Senate. Meanwhile, Esper has returned to serving as Army secretary.

"While my time in this role is anticipated to be brief, I am fully prepared and committed to serve as Acting Secretary of Defense, and I will provide continuity in the leadership of the Department," Spencer said in a letter to Defense Department personnel. "Our allies and partners can rest assured that the Department of Defense remains ready to respond to meet our commitments around the globe in support of our common goals."

Esper graduated from West Point in 1986 -- the same class as Secretary of State Mike Pompeo -- and went on to serve in the Army for over a decade, including a deployment to the Middle East during the Gulf War.

Before joining Raytheon, he spent a considerable amount of time on Capitol Hill as a Senate committee staffer and adviser to several senators. He was also the deputy assistant secretary of Defense for negotiations policy during the Bush administration.

As Army secretary, Esper spent time with the president, traveling with him to an Abrams tank factory in Ohio and to the southern border amidst the deployment of active duty soldiers there.

Esper stepped into his role as acting Defense secretary as the Trump administration was considering how to navigate increased tensions with Iran. And in late June, he attended a NATO defense ministerial in Brussels, urging U.S. allies to confront Iran.